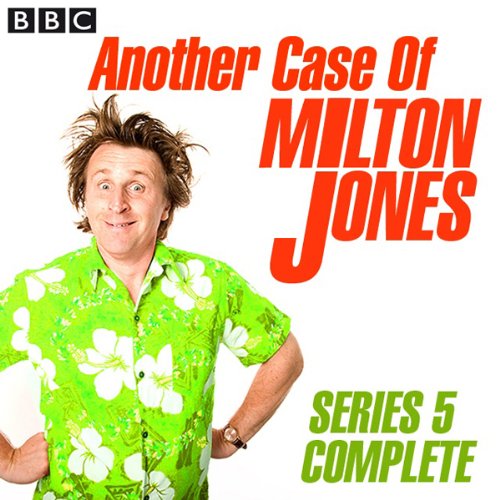 In each episode, Milton is a complete and utter expert at something - Astronomer, Diplomat, Undercover Journalist, Celebrity Gardener (!), Royal Speech Therapist or Lorry Driver - and in each episode, with absolutely no ability or competence, he plunges into a furiously funny and fast-paced adventure with utterly hilarious results.

In the first of the complete six episodes, move over Brian Cox, because Milton Jones is now a world-famous astronomer and seeker after scientific truth and accuracy. Typical Sagittarian. Part 2 and Milton is an International Diplomat who is on the run after leaking all the UN’s emails - except for the Swiss ones, which were far too dull. In the next episode, he crosses stamens with a deadly rival in the vicious cutthroat world of gardening, and in Part 4, in a little tribute to a slightly well-known film, Milton becomes the royal Speech Therapist. And so he helps a Prince find his voice and a king find his pomegranates.

After that Milton Jones is the king of the world of refrigerated haulage with his very own fleet of iced lorries, and where he has to face a bitter rival more deadly than one of his mum's transport caff's all-day breakfasts. And in the final part, Milton becomes Britain’s best-known undercover journalist. Which means that Milton also becomes Britain’s most least-effective undercover journalist….

What listeners say about Another Case of Milton Jones: Complete Series 5

Where does Another Case of Milton Jones: Complete Series 5 rank among all the audiobooks you’ve listened to so far?

Defenetly in my top 10 listens.

Milton of course, who else. His superbe timing and fast delivery of puns is 2nd to none, although the lovely calming tones of Anton make me think of a knite in shining armor.

Have you listened to any of the narrator’s other performances? How does this one compare?

Any I can get my hands and ears on.

It had me in fits of laughter from start to finish, and I was even singing the theme song too.

If you're feeling down in the dumps and just want a totally crazy listen, then Milton is your man.