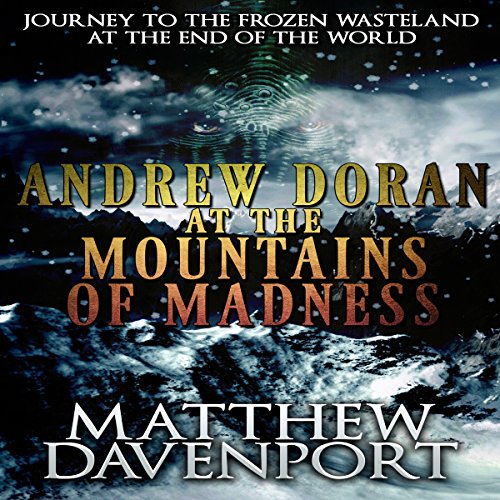 Andrew Doran at the Mountains of Madness

Dr. Andrew Doran is back! Narrowly saving the world from the cosmic advance of the Nazi armies, Andrew Doran is loathing with his new position as dean of Miskatonic University. The duties of a dean are too slow for the lifestyle that Andrew had become accustomed to... but he doesn't have to wait long until he finds that the previous dean had sold documents to the Nazis direct from the library of Miskatonic University. Specifically, the documentation of a fateful voyage by Dr. William Dyer to the Antarctic and the horrors he faced there.

Knowing that the German army won't hesitate to travel to the Antarctic and seize the alien weaponry that is held there, Andrew and his faithful companion, Leo, embark on an adventure to find the missing Dr. Dyer and beat the Nazis to the lost city in the frozen wasteland at the end of the world.

To make matters worse, Andrew is battling his own demons in the form of the physical manifestation of his own insanity. Can Andrew find the missing William Dyer and beat the Nazi menace to the cache of weapons before his insanity literally consumes him?

What listeners say about Andrew Doran at the Mountains of Madness

The dean, the nazis, the zombies, and Antarctica

Andrew Doran is back!
Action! Wiseassery! Badassery! Sarcasm and snarkery! And a fun plot with godawful villains, magic, and excellent imagery! The publisher's summary will entice, and no spoilers allowed. Just hop on with the new dean of Miskatonic U and enjoy the ride!
Shaun does a better job with this volume, so there is hope yet.
This book was a much appreciated gift

If you know anything about Lovecraft lore and stories, you'll love this book. it's filled with Lovecraft mythos and Davenport continues to deliver amazing works of literal art that put you on the edge of your seat!

if you don't know Lovecraft, then some of the monsters in this tale might go over your head, but it doesn't take ANYTHING away from the story. Another winner for the Author

This (hopefully continuing) series is a fun and nicely crafted urban fiction spin on Lovecraft. Plot, pacing, and style remind me of early 20th century noir. Think Maltese Falcon with monsters and nazis.

Aside from the scattered use of painful French accents, the reader really works for this title. Mainly because I think he really understands the title character.

The book is narrated by the protagonist, a gritty, pragmatic man of action who hunts evil but sucks at the paperwork. As with the previous book, it's action from beginning to end, with several radical scene changes.

The first book was mainly set in a tour from the US across the Atlantic and through nazi-occupied Europe. This one spans a trip to Antarctica, but also explores more metaphysical scenery including the dream land and a non-euclidean alien city.

I wouldn't have minded a few more hours of content, but the story really didn't need it. For both reasons I look forward to what I hope will be further books in the series.

It's worth the purchase, in my opinion, but I had a review copy.

A great follow up to The Statement of Andrew Doran. The story follows the breadcrumbs laid down by HP Lovecraft in At the Mountains of Madness, The Shadow over Innsmouth and The Colour out of Space, telling us what happens after the old gent of Providence finished his books seventy years ago. The story has the great ingredients of what might be called a 'boys' own adventure': Nazis to thwart, monsters to kill, a brave group of heroes with complex problems, multiple villains and a cracking pace of writing.

Personal opinion, I think the narrator did a better job than the previous book (and he was good last time). He is very like Harrison Ford playing Indiana Jones and it's a great match for the story!

You don't need to read the other books to appreciate this but I'd recommend it as they would round out the overall story.

if you love HP Lovecraft then this loving set of stories glory in his world and let you return to experience the horror and the adventure.

a fun mix of Spenser, Indiana Jones, and Dirk Pitt

What did you love best about Andrew Doran at the Mountains of Madness?

The story arc with Olivia

Did Shaun Toole do a good job differentiating all the characters? How?

Overall and very pleased that Davenport asked me to review ANDREW DORAN AT THE MOUNTAINS OF MADNESS: THE ADVENTURES OF ANDREW DORAN, VOLUME 3. I still feel like Andrew Doran is the perfect mix of Spenser, Indiana Jones, and with the addition of lovecraft it is just a hoot. I only see this series getting better and better.

Andrew Doran at the Mountains of Madnress

Would you listen to Andrew Doran at the Mountains of Madness again? Why?

Andrew Doran at the Mountains of Madness is a action packed book that leaves you wanting more. Even if it upsets you at times for the things that happen to the characters even the minor ones. I listen to the audio version of this book like I did with The Statement of Andrew Doran. Mountains of Madness has greatly improved over the Statement of Andrew Doran. Anyone that loves a fast action pace book should give this a read.