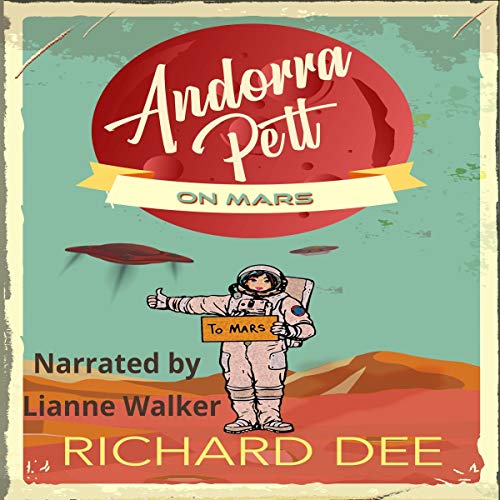 Everyone said it was suicide, but were they right?

Andorra Pett’s ex turns up with some bad news. Her best friend Maisie has killed herself, on Mars.

Trevor doesn’t believe it. Neither does Andorra; it just wasn’t like her. He wants Andorra to come back with him to look around and see if she can find some answers.

Despite her misgivings, Trevor’s paying and says she can take Cy with her. It’ll be a cheap holiday! What can possibly go wrong?

It soon becomes clear that there’s a lot more going on. Rival gangs, hidden messages, and new friends all point Andorra toward a much bigger story.

What was Maisie caught up in?

What listeners say about Andorra Pett on Mars

Book two in the series (but stand alone) in which we meet the ex boyfriend who sent Andorra and her friend, Cy, racing into space to start a new life in the first place. And he brings Trouble. Andy's friend has been found dead on Mars, and the authorities say it was suicide. But surely this could not be true?

This is another fun cosy murder mystery, written in the first person, with an endearing central protagonist, although it didn't have the sparkle of the first book, Andorra Pett and the Oort Cloud Cafe. This is undoubtedly because of the change in narrator. Although good, and performing well, Joanne Walker did not have the same bubbling warmth which made Gill Coltman the perfect Andorra and turned the earlier enjoyable book into one of unadulterated pleasure.

This said, Andorra Pett on Mars is still an enjoyab!e book worth reading, combining as it does, science fiction and murder mystery. My thanks to the rights holder who, at my request, freely gifted me with a complimentary copy and I look forward to Andorra's further adventures.

I couldn’t stop turning the pages. And that’s tricky with an audiobook ;-)

Listened to Lianne bringing all of Richard’s intriguing and slightly sardonic words to life in one day. A rattling good listen and so skilfully told.

Let’s have the next in the series now please.

An out of this world mystery

I enjoyed this book. What I like is the unusual setting for the story to take place in, not many cozy mystery sleuths can say they solved a murder on mars, a nice twist on the norm. This is book two and even though it does continue on from the first book it isn't necessary to have read or listened to it but you learn a lot about what it is like to live in space or what the author thinks it is like and he creates a wonderful world and mystery in both books. The characters are fun and certainly make the story entertaining, I especially liked the grumpy sidekick Cy, who had a lot of fun and enjoyed his roll. The mystery was a little bit obvious, what the well kept secret was but somehow it worked and unfolded nicely. I hope there is another book coming soon.
Andi might have hated her best friend Maisie, after she stole her ex boyfriend. But when the cheating boy in questions turns up in her cafe to let her know Maisie is dead and the police have ruled it suicide, Andi finds herself returning to Mars to investigate and ask questions at the nursing home she worked at. Andi takes Cy along to stop herself from killing the cheat on the long journey back. When they arrive they quickly pick up on two sets of groups that are paying way to much attention to them. Just what did the cheat not tell them? Something more is going on than wanting them to talk to an old man and when Andi receives a secret letter from a dead woman, her room gets tossed and the care home Maisie worked in is burgled it seems Maisie suspicion of her boy friend and Andi 's ex was right, he is in it up to his cheating neck. Can Andi and Cy unravel the clues Maisie left for them to find what everybody is looking for?
I liked the narrator she had a very distinct voice that at first I wasn't sure I liked but as the story unfolded it soon grew on me and I ended up liking it.
I was given this free review copy audiobook at my request and have voluntarily left this review.

I listened to the first book several months ago and was just so giddy to get back into this world. I gobbled this book up in one day!!

The second book in the series picks up right where book one ends. I think you really need to read the first book to get the full enjoyment of this story but don't let that stop you - JUMP IN!!

Andorra and Cy are recruited into this mystery. I love that you know who the bad guy is from the prologue but the way the story unraveled to that inevitable conclusion was awesome!

I really hope there is a book three!!

This was a good listen. Everyone loves a treasure hunt.
I was given this free audiobook copy at my request and have voluntarily left this review.