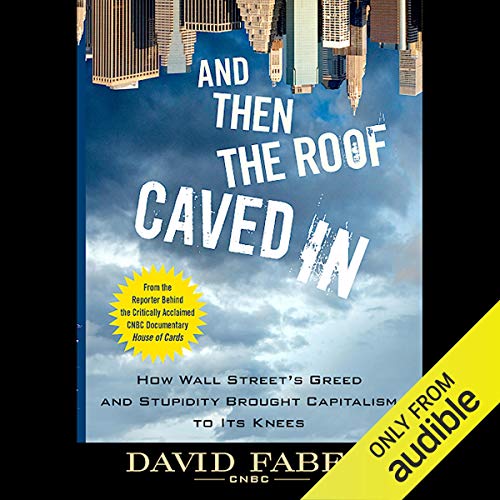 And Then the Roof Caved In

How Wall Street's Greed and Stupidity Brought Capitalism to Its Knees
By: David Faber
Narrated by: Dennis Holland
Length: 6 hrs and 37 mins
Categories: History, 21st Century
4.5 out of 5 stars 4.5 (2 ratings)

And Then the Roof Caved In

CNBC's David Faber takes an in-depth look at the causes and consequences of the recent financial collapse.

And Then the Roof Caved In lays bare the truth of the credit crisis, whose defining emotion at every turn has been greed, and whose defining failure is the complicity of the U.S. government in letting that greed rule the day. Faber painstakingly details the truth of what really happened with compelling characters who offer their first-hand accounts of what they did and why they did it.

Faber explains the events of the previous seven years that planted the seeds for the worst economic crisis since the Great Depression. He begins in 2001, when the Federal Reserve embarked on an unprecedented effort to help the economy recover from the attacks of 9/11 by sending interest rates to all-time lows. Faber also provides an up-close look at where the crisis was incubated and unleashed upon the world - Wall Street - and introduces us to insiders, from investment banks and mortgage lenders to ratings agencies, that unwittingly conspired to insure lending standards were abandoned in the head-long rush for profits.

"CNBC's David Faber delivers a clear-eyed look at the origins of the crisis.... As an anchor of the Faber Report, the author was on the front lines of the financial crisis and spoke with many of its key players. ( Fortune)

This is easily the best book to understand the broad range of issues concerning the recent economic meltdown in the US. I have read half a dozen books on these issues and this was the best. The Big Short and The World's Greatest Trade were more interesting but you came away confused on what caused the overall problems. Faber takes you through step by step in a clear and interesting manner.

From complex financial instruments to political climate Mr. Faber writes on of the most balanced and professional explanations for the current financial situation. If you want to know how we got here, this is a "must read."

Loved it - This is a masterpiece

David's writing and story-telling skills are truly remarkable. He includes real stories throughout the book to keep the reader hooked on does an amazing job at explaining the financial nitty-gritty. This book manages to reach that holy ground of being simple without being simplistic.

Also the narration by Dennis is amazing, this book would have been a bore on audio had it not been for the superb narration and production by Audible.

After listening to around 30 books on 2007/2008, and reading another 9 or 10, this is one I come back to over and over for a clear and cogent reminder of what went wrong, and how it could have been avoided.

I loved listening to this book. It is shocking, crazy, and diabolical how the subprime mortgage disaster unfolded. Not only that, the author adds in some real life accounts of families who lost their houses, managers who sold mortgages, smart people and dumb people who lost all, or became rich!!! Fantastic. Loved the narration too.

Best Book so Far on the Causes of the 2008 Crash

This is by far the best book I have found on the causes of the 2008 financial meltdown. David Faber has managed to do that concisely (the book is less than 200 pages), and clearly (as befits an able journalist, which he is). This book has it all: it provides a clear explanation of "CDO's", "CDS's", leverage ratios, LTV ratios, and AAA credit ratings, all of which are essential to understanding what happened.

It also makes clear that you don't need to be a rocket scientist to understand what happened. It was driven by a devil's brew consisting of Wall Street bankers focused on short-term trading profits and bonuses mixed in with unregulated mortgage brokers who were focused on commissions that flowed from the easy money supplied by Wall Street. The brew was seasoned by corrupted rating agencies who allowed the lure of big fees to smudge what had previously been a reputation for professional and objective credit analysis. Congress and the Administration had no clue what was happening except to applaud the expansion of home ownership in the country. The housing market is so big that the fees, commissions, and profits (as well as overlooked risks) generated as the subprime mortgage market grew became enormous; so large that their corrupting influence overcame responsible risk management at most of the major Wall Street firms. Things became so ridiculous that by 2006 all one needed to get a mortgage loan in Orange County, CA was proof that you were a real person and that you were buying a real house. Whether you had the income to pay off your loan over time or a down payment was no longer an issue. Not only ridiculous; it was also disgusting and dangerous.

I have waited a while before writing the review. I will be more charitable because of the wait. This is the book you would expect from a reporter at MSNBC. It tows the standard media line on the financial crisis and never waivers. The regulators did not have enough power, wall street was greedy, everyone else was a victim. Why this happened now when the regulators have more power than ever and wall street is as greedy as ever is, of course not covered. None the less there is good and interesting information in this book. It has a lot of truth but not the whole truth and nothing but the truth.
For the other side read (listen to) Sowell’s book “The Housing boom & Bust”. Listen to them both and then make up your own mind.

Extremely interesting and informational about the greed in mortgage lending that led to the market and housing crash!!

A fantastic accounting and explanation for one of the most troubling times in our nation's history. Capitalism brought to its knees by greed!

The full and complete history of the 2008 wall street bailout abd the sub prime market collapse. I have read several books on the 2008 collapse; but this one is by far the best . starting with the Community Revitalization Act and ending with why we are still in the economic duldroms.