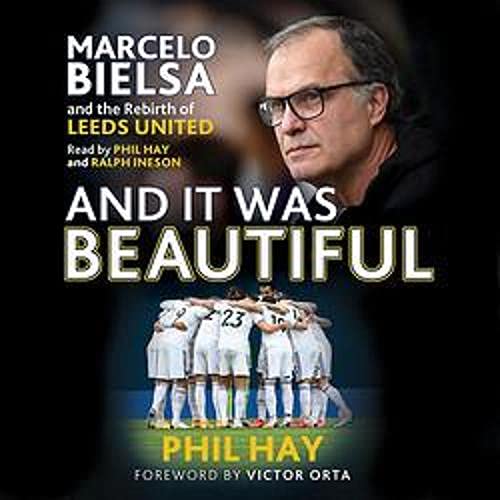 And It Was Beautiful

By: Phil Hay
Narrated by: Phil Hay,Ralph Ineson
Try for £0.00

The behind-the-scenes story of the Marcelo Bielsa revolution at Leeds United and their first season back in the Premier League after 16 years of hurt.

When Marcelo Bielsa was appointed head coach of Leeds United in the summer of 2018, the club had just finished 13th in the Championship - their 15th consecutive season outside the top flight - and were defined as much by their excesses and disasters off the pitch as their lack of success on it. Bielsa changed everything.

In guiding Leeds back to the promised land of the Premier League, he has transformed the club into a vastly more dynamic, entertaining and professional outfit, fully endearing himself to the Leeds faithful and capturing the imaginations of football fans around the world. With his unique tactical approach, strict diet and body fat controls and a gruelling training schedule - including his infamous 'murderball' sessions - Bielsa has shaped a gang of Championship misfits and journeymen into a team that plays breathtakingly relentless attacking football and is more than capable of going toe-to-toe with the game's established heavyweights.

In And It Was Beautiful, Phil Hay documents the fortunes of Leeds United under Marcelo Bielsa during their return to the Premier League for the 2020/21 season. By weaving in stories of crises from the club's purgatory in the English Football League, he presents a comprehensive and compelling portrait of an enigmatic manager whose values are the antithesis of everything that has previously gone wrong at Leeds during the dark days of Ken Bates, Massimo Cellino and GFH.

Phil pulls back the curtain on Bielsa's innovative tactical methods, his unconventional yet highly productive relationship with owner Andrea Radrizzani and Director of Football Victor Orta, his intensely loyal backroom team and the extraordinary cultural impact Bielsa has had on the city of Leeds - from murals and songs to cult fanbases in the provinces of Argentina. The result is a unique and beautiful love affair that has made dreams come true.

What listeners say about And It Was Beautiful

The content is brilliant. I just wish Phil had narrated it all. Ralph's narration is just too deep it makes it hard to listen to in places which is a shame as after listening to Phil on his podcast it would have been ideal for him narrate.

once you start you won't stop. great listen that puts the meat on the bones of a skeletal story

Not much to it in the wider scope

Not much information that isn’t readily available and already known for the average fan.

Doesn’t help that as a fan himself Ralph Inesons narration is flat and he can’t even say the name of the chairman correctly.

Almost everything you get out of this book can be heard in the Phil Hay Show podcast.

all leeds arent we, Phil? sensational stuff from the big man once again, top work

Didn't like the narration it got annoying after a while as for the book itself I found it slightly boring nothing I haven't already read or heard about.

I have loved reading Phil’s work over the years and this book encapsulates much of the emotion of the last few years. Thank you for this book. Ralph Ineson’s narration is fantastic

Absolute belter of a book! Some things you just have to hear!! Beradi you are a lion!! A white one!!

Nice to have our roller coaster of a ride, in one place thank you.

Wish that Mr Hay had been able to narrate the whole of this excellent and interesting book as the other narrator has such a grinding and uninteresting voice that made it very hard listening at times unless you were concentrating 100% on the audio, without ANY distractions whatsoever!!