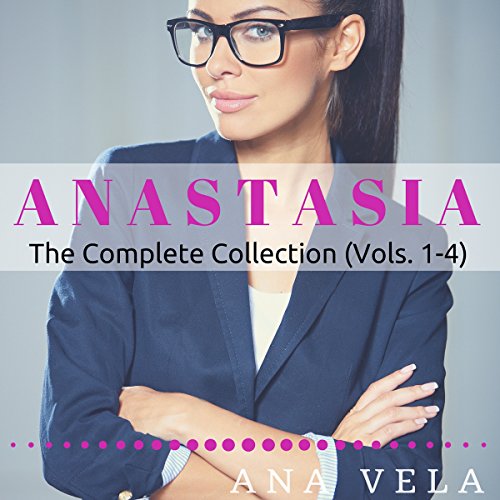 The complete collection of the Anastasia series!

This boxed set includes every Anastasia story! Follow her journey from beginning to end. You'll get to hear the following:

Her First Position - Book One

Pretty, naive, 21-year-old Anastasia Nabokov moved to the big city desperate to prove herself at her new internship with one of the giants of the banking industry. She's hoping this is the break she needs to really live the life she's always wanted.

But living out of a hotel, with no friends to speak of, she's an easy target for her grumpy boss and the other male interns. Thing are not going as she had planned.

Luckily for her, the adventurous Victoria is more than happy to show Anastasia the ropes - both at work and at play. It turns out, for Anastasia, the luscious Victoria is a good person to know - both professionally and personally.

With the help of her new friend (and roommate) the adventurous and sexy Victoria, Anastasia is quickly making a place for herself in the big city. But when her girl-next-door looks catch the eye of the gorgeous market analyst Bryce McCormick, everyone warns her off the office Lothario. Even Victoria.

Despite the warnings, Anastasia is sure, since she knows his game, she'll remain immune. However, Bryce's dimpled smiles, hard body, and teasing flirtations are hard to resist.

Anastasia's only been interning at Edgeworth, Epstein, and Kendrick for six months, so when she gets assigned the plum position of filling in as assistant to one of the most powerful Junior Partners, she can't believe her luck. Robert Benning is a giant in the world of investment banking, and Anastasia can't wait to observe him at work and learn from the best.

But it turns out Robert is more than just savvy and hardworking. The older man is commanding and incredibly sexy too. Now, Anastasia is determined to not only study her mentor's moves, but to teach him a few of her own. It turns out there are quite a few perks to being an executive's assistant.

Whatever It Takes - Book Four

With only two months left on her internship at Edgeworth, Epstein, and Kendrick Investments, Anastasia really needs to parlay her knowledge, expertise, and abilities into a long-term position at the company. So, when the opportunity presents itself to help reel in billionaire CEO Parker Willis as a new client, Anastasia jumps at the chance. This could be the break that guarantees she'll join the permanent ranks of E, E, and K employees.

What listeners say about Anastasia: The Complete Collection

The narration is horrible I could even past chapter 1. The story seems like it might be good though

I downloaded the boxer set and could only listen to the first 15 minutes.😖😖😖 I am very disappointed.