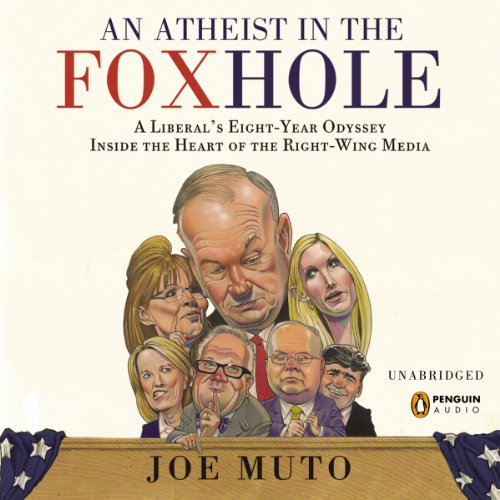 An Atheist in the FOXhole

The "Fox Mole" - whose dispatches for Gawker made headlines in Businessweek, The Hollywood Reporter, and even on The New York Times website - delivers a funny, opinionated memoir of his eight years at the unfair, unbalanced Fox News Channel working as an associate producer for Bill O'Reilly.

Imagine needing to hide your true beliefs just to keep a job you hated. Now imagine your job was producing the biggest show on the biggest cable news channel in America, and you’ll get a sense of what life was like for Joe Muto. As a self-professed bleeding-heart, godless liberal, Joe’s viewpoints clearly didn’t mesh with his employer - especially his direct supervisor, Bill O’Reilly.

So he did what any ambitious, career-driven person would do. He destroyed his career, spectacularly. He became Gawker’s so-called Fox Mole.

Joe’s posts on Gawker garnered more than 2.5 million hits in one week. He released footage and information that Fox News never wanted exposed, including some extremely unflattering footage of Mitt Romney. The dragnet closed around him quickly - he was fired within 36 hours - so his best material never made it online. Unfortunate for his career as the Fox Mole, but a treasure trove for book listeners.

An Atheist in the FOXhole has everything that liberals and Fox haters could desire: details about how Fox’s right-wing ideology is promoted throughout the channel; why specific angles and personalities are the only ones broadcasted; the bizarre stories Fox anchors actually believed (and passed on to the public); and tales of behind-the-scenes mayhem and mistakes, all part of reporting Fox’s version of the news.

What listeners say about An Atheist in the FOXhole

Entertaining but not hard hitting

If you could sum up An Atheist in the FOXhole in three words, what would they be?

I say this as a definite Fox-hater and as a progressive: Joe Muto is kind of a prick.The book IS entertaining - the most interesting parts are learning about the working mechanisms of Fox News. It was fascinating to hear how low-budget the whole operation is, as well as the thought processes behind Fox's program development.But Muto himself comes across very smug, ingratiating, and immature. He has to remind the reader constantly about his true liberal feelings the whole time - we get it. He pretends to have been doing his own "small part" to influence the network, I guess to justify his working there, but all his actions (including the Gawker mole business) are petty - sarcastic jabs and pranks. And what did his sex life with his apparently crazy girlfriend have to do with being a "liberal in the Foxhole?" The integration of his persona into the memoir smacked of self-applause and opportunism undeserved of someone who obviously took his former employer's opportunism to heart - garnering himself notoriety and a book deal with minimal journalistic payoff.That being said, it's still an engrossing, lighthearted read and, you know, a good jab at O'Reilly and Fox inanity. Just take Muto with grain of salt and don't expect it to be an expose.

Yes. Interesting tidbits about the news making process in general, and fox news in specific.

The author has a tendency to linger on, and up-play the dramatic value of the day of his "capture". It would have been more interesting to hear more about the news making/editing processes.

Ann Coulter is nice -- then again, you probably have to be to keep a successful TV career up.

A fun and worthwhile listen.

I missed the "Mole" story when it broke in 2012, so I was coming to this completely fresh. I'm glad I did. Joe Muto's thoughts in retrospect make a much better story than it did while it was unfolding. This is often true for newsworthy events. I found the story funny, laughing out loud to my radio many times throughout the book.

Muto's narration works well with the book. I wouldn't have wanted to trade professionalism for his personality.

That's it. Meh
This book is just autobiographical and to be honest I didn't dislike the author but I have little to no interest in the man's life. He offers up literally no information about fox that you have not already concluded and know yourself. Unless you've lived under a rock for the last 20 years.

Not bad, not great

What did you love best about An Atheist in the FOXhole?

Learning about the structure of Fox and how it operated, the emphasis on ratings, and the difference between on-air persona and off-air persona for some people.

Would you be willing to try another book from Joe Muto? Why or why not?

The scene where Muto attempts to order a fallafel.

If you could give An Atheist in the FOXhole a new subtitle, what would it be?

A Kid Gets Hired By Fox News, Does Something Rash, And Feels Really Bad About It.

Entertaining; lots of ambivalence to fox news, which is to be expected. It feels like this book could've been excellent if it picked a direction and pushed a little farther, but as it stands, the closest it has to an overall tone is 'apologetic'. There IS some really neat information in here, but it only seems to come when the author forgets the circumstances of his firing and just explains how Fox News works. It's a decent book, entertaining and a fun read, but not groundbreaking or particularly deep.

I wish it had been more hard hitting

Well written, fun to read, but he still obviously had some ambivalence about Fox News and Bill OReilly. Oh well, he was young. I wish him well. I hope he's found another job by now.

not a complete waste of time

What could Joe Muto have done to make this a more enjoyable book for you?

Have you listened to any of Joe Muto’s other performances before? How does this one compare?

does he have any other performances?

Could you see An Atheist in the FOXhole being made into a movie or a TV series? Who should the stars be?

movie, of course: some young actors with whom i am not familiar

self-serving account of another disloyal person on a minor scale but in the same tradition as bradley manning and our buddy snowden. and i hate fox news but this guy is no one to emulate. sorry i contributed $.