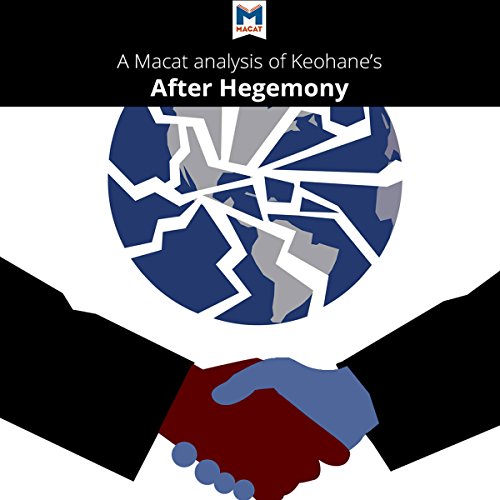 An Analysis of Robert O. Keohane's After Hegemony

An Analysis of Robert O. Keohane's After Hegemony

The ideas set out by American international relations expert Robert O. Keohane in 1984's After Hegemony have had a huge impact on policy debates over the last three decades, both in political circles and in academia.

Hegemony means the social, cultural, ideological or economic influence of one dominant group. Contemplating a post-Cold War world half a decade before the Berlin Wall fell, Keohane asks if international cooperation can survive in the absence of a single superpower. The answer, he decides, is yes. Economic cooperation will not only survive, it will thrive.

Keohane examines why and how international regimes like the United Nations really do foster cooperation and finds that the idea of states or organizations working together is, in fact, more widespread than many had previously assumed. Neither a realist nor an idealist, Keohane stakes out an intellectual middle ground, arguing that a "complex interdependence" exists in international economics, encompassing not just states, but also multinational corporations.

I haven't seen such bad audio
They even repeat the same sentences many time !!!!!
This could be summarized in 10 minutes or so
The rest are just repeating the same words !!!
I would have mark this as scam not something acceptable from audible

Better than the Macat analyses of Morgenthau and Waltz. But just as them, its repetitive.