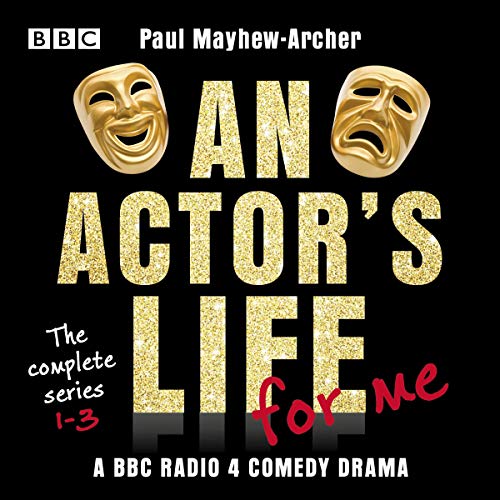 An Actor’s Life for Me: The Complete Series 1-3

All 19 episodes of the BBC radio comedy about an aspiring actor with dreams of stardom.

Young actor Robert Wilson is desperately seeking work – and he’s prepared to do almost anything for his big break. He’s convinced that he’s only one audition away from fame and fortune: but while he builds castles in the air, his agent Desmond and girlfriend Sue try their best to bring him back down to earth.

In these three series, Robert gets a part as a chauffeur (except he can’t drive), gets carried away in a romantic leading role and gets his party politicals in a bit of a pickle. Plus, his role in a seedy sex farce leads to a sticky situation with Sue’s parents, his job performing in a prison means he finally has a captive audience and his appearance on children’s TV causes his flat to be surrounded by press – but is that an actor’s dream, or an actor’s nightmare?

Written by Paul Mayhew-Archer, who went on to co-write The Vicar of Dibley and Mrs Brown’s Boys, this lively comedy was a huge success on radio and transferred to TV in 1991 for one series. John Gordon Sinclair plays Robert, with Caroline Quentin and Gina McKee as Sue.

What listeners say about An Actor’s Life for Me: The Complete Series 1-3

I was so disappointed. I only got to the 4th episode and could stand it no more. So predictable it was cringeworthy.

The performances were ok but did they really go into this with optimism?

Sorry one of the worst buys I’ve made on Audible.

There were a few laugh out loud moments and overall, this was a pretty pleasing farce. Would definitely listen to this again.

This is an extremely funny show from the pen of Paul Mayhew-Archer. A great cast and a great script. This one would have transfered to TV and been a great hit I'm sure. John Gordon Sinclair and Caroline Quentin play their parts so well with great support form the other cast members.

I really enjoyed this book it was funny and had me giggling along.
Great characters very entertaining

Laugh my bum off🤣

Couldn't stop laughing throughout this book 😂 Very very funny satire of actor's life, he's determination to be "discovered" and appreciated for his acting talent. Brilliant cast's performance and unpredictable outcomes in each episode, combined with witty humour guarantees few hours of genuine laughter and joy