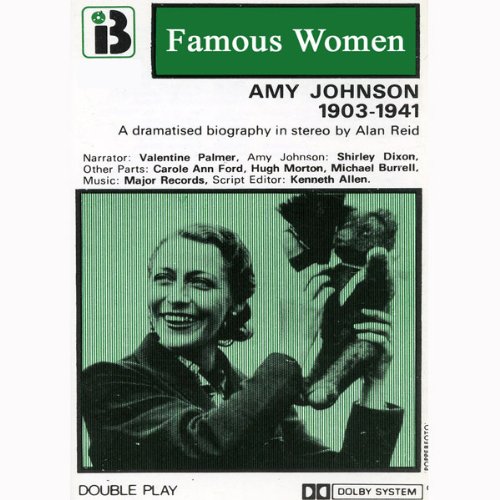 This biography of record-breaking English aviatrix Amy Johnson combines real-life testimonials with innovative character acting. Johnson set numerous long-distance aviation records, among them her famous 1930 solo flight from England to Australia. Johnson is also remembered for her mysterious disappearance, her body never recovered after it was last seen floating from a parachute above the Thames on a stormy 1941 day. Here a multitude of prolific actors combine to voice the primary players in Johnson’s brief, but accomplished career. Shirley Dixon (Wallace and Gromit, Inspector Morse) imbues Johnson with unflappable ambition and playful working-class wit, following the pilot from her humble beginnings as a typist through her pioneering women’s rights advocacy. Impeccable English orator Valentine Palmer hosts the proceedings with finesse and fluidity.

Amy Johnson's greatest achievement was her solo flight to Australia, made within a year of her obtaining a full pilot's licence. (At the time she was the only woman in the world to hold a full ground-engineer's licence.) In the remote jungles and islands of south-east Asia, her flying ability and engineering knowledge enabled her to complete the flight. Throughout her life she fought anti-feminine prejudice, becoming a major pioneer in aviation. Her tragic and mysterious early death in an air crash helped to turn her life into an aviation legend.
©1976 Alan Reid (P)1976 Ivan and Inge Berg
History
Show More Show Less