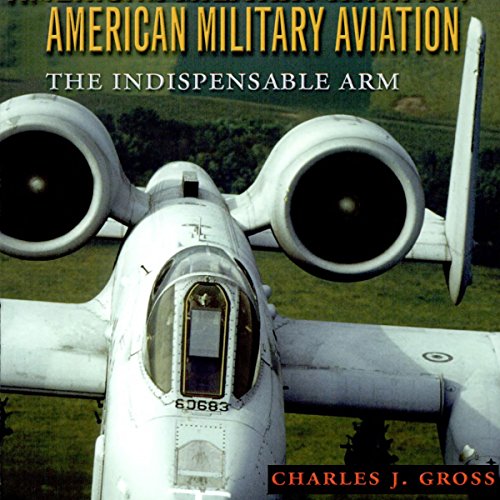 Since the Wright brothers made their famed flight at Kitty Hawk in 1903, aviation has emerged as the indispensable arm of American military power. In this detailed and informative history, Charles J. Gross traces its development from the technological antecedents of the Wright brothers' triumph through the air war for Kosovo. Drawing on examples from all periods and all service branches, he explains the roles of politics, economics, and technology in shaping air power in the US armed forces and assesses the actual impact of military aviation on warfare.

Gross discusses major developments in aircraft, doctrine, training, and operations. He also provides discussions of airlift, in-flight refueling, military budgets, industry, and interservice squabbling. He provides assessments of Eisenhower's New Look and MAD (mutually assured destruction); of McNamara's effort to use commonality of equipment to cut costs and Kennedy's buildup of the military; of the Nixon Doctrine and the failure of air power to resolve the long, drawn-out conflict in Southeast Asia; and of the growing reliance on American airpower in the post-Cold War world. Military professionals, scholars, civilian government policy makers and planners, members of the media who concentrate on defense matters, and interested members of the general public will all rely on this book as an invaluable guide.

The book is published by Texas A&M University Press.

"Those who study air power will want to have American Military Aviation on their bookshelf for ready reference." ( Parameters)
"Provides a well-organized, fast-paced, clear narrative for the general reader and military historian...a unique, up-to-date scholarly study on the subject." ( Journal of Military History)
"This fine history provides a balanced perspective on 'military' aviation." ( Almanac of Seapower)