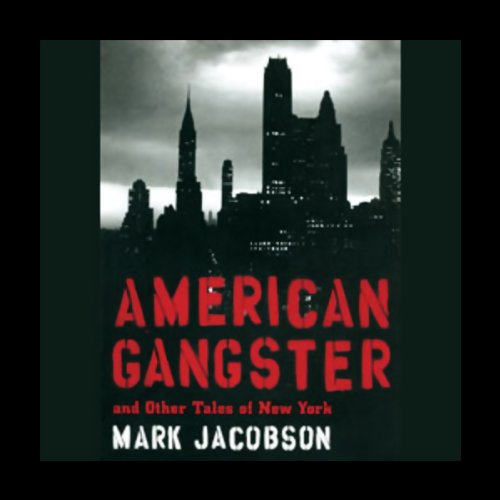 American Gangster and Other Tales of New York

American Gangster and Other Tales of New York

In the 1970s, Frank Lucas was the king of the Harlem drug trade, bringing in over a million dollars a day. He lived a glamorous life, hobnobbing with athletes, musicians, and politicians, but Lucas was a ruthless gangster. He was notorious for using the coffins of dead GIs to smuggle heroin into the United States, and, before being sentenced to 70 years in prison, he played a major role in the near death of New York City.

In American Gangster, Mark Jacobson's captivating account of the life of Frank Lucas joins other tales of New York City from the past 30 years. The collection features a number of Jacobson's most famous essays, as well as previously unpublished works and more recent articles. Together, they create a vibrant, many-layered portrait of the most fascinating city in the world, by one of the most acclaimed journalists of our time.

Not a Frank lucas biography

A promising start but as soon as the subject changes from 'American Gangster' Frank lucas, then my interest dropped totally.
This only gets two stars for the quality of the narrator, otherwise it would have been one.
Maybe of some interest to ex pats.
But limited use to others, and none whatsoever to those looking for either a Frank Lucas bio or audiobook of the film.

American Gangster and Other Tales

Excellent collection of journalistic bits and pieces. Jacobson is a really engaging writer who loves New York. He worked at Village Voice and New York magazine. Several stories focus on the NY underworld, but they are biographical sketches of characters. As such, they provide great historical backdrop to NY in the 70's, 80's and the 21st century. HIs stories sparked the TV series Taxi, and the movie, American Gangster.

A great book, a great narrator and the stories in it, are extremely interesting. Definitely worth a listen....

I was hoping to hear a lot more detail regarding the life of Frank Lucas. Rather, only there was only about 1 hour of this 9+ hour book devoted to the story of Frank Lucas. Appoximatly 8 hours of this book consisted of other short stories written by the same author; not what I was looking for.

Like one of the reviewers before me I was definately let down by the one hour at most about Frank Lucas. The rest of the stories were unrelated to Frank Lucas and had nothing to do with his gang or the police department involved with Frank Lucas. I definately felt duped! This audio book should read stories about New York People. Don't get it if your looking for Frank Lucas imformation!

I loved the vocal delivery that the narrator injected into the reading of this book. The book should&#8217;ve been entitled "American Gangster - behind the scenes". I think it was very interesting on how he explained on how the movie came about and how the actual person felt about it (Frank Lucas). It could've been more detailed but since I saw the movie it gave me a few bits and pieces that were missing from the actual movie. If you liked the movie I would definitely recommend to this book.

Not really what I expected. I thought it was an entire book on American Gangsters.