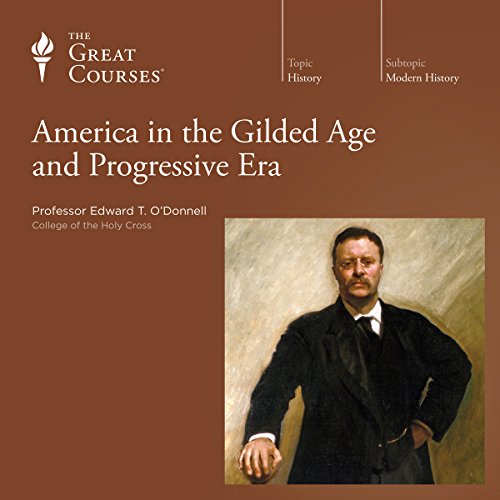 America in the Gilded Age and Progressive Era

America stands at a dramatic crossroads: Massive corporations wield disturbing power. The huge income gap between the one percent and the other 99 percent grows wider. Astounding new technologies are changing American lives.

Sound familiar? These and other issues that characterize the early 21st century were also the hallmarks of the transformative periods known as the Gilded Age (1865-1900) and the Progressive Era (1900-1920). Before the Gilded Age and Progressive Era, America was a developing nation, with a largely agrarian economy and virtually no role in global affairs. Yet by 1900, within 35 years, the US had emerged as the world's greatest industrial power.

Explore these tumultuous times in America in the Gilded Age and Progressive Era. Over decades marked by economic, political, social, and technological upheavals, the US went from an agrarian, isolationist country to the world's greatest industrial power and a nascent geopolitical superpower. In a time rife with staggering excess, social unrest, and strident calls for reform, these and other remarkable events created the country that we know today: industrialization gave rise to a huge American middle class; voluminous waves of immigration added new material to the "melting pot" of US society; the phenomenon of big business led to the formation of labor unions and the adoption of consumer protections; electricity, cars, and other technologies forever changed the landscape of American life.

In taking the measure of six dramatically innovative decades, you'll investigate the economic, political, and social upheavals that marked these years, as well as the details of daily life and the cultural thinking of the times. In the process, you'll meet robber barons, industrialists, socialites, reformers, inventors, conservationists, women's suffragists, civil rights activists, and passionate progressives, who together forged a new United States.

Since Audible doesnt provide us with chapter headings, here is the full list :
1. 1865: “Bind Up the Nation’s Wounds”
2. The Reconstruction Revolution
3. Buffalo Bill Cody and the Myth of the West
4. Smokestack Nation: The Industrial Titans
5. Andrew Carnegie: The Self-Made Ideal
6. Big Business: Democracy for Sale?
7. The New Immigrants: A New America
8. Big Cities: The Underbelly Revealed
9. Popular Culture: Jazz, Modern Art, Movies
10. New Technology: Cars, Electricity, Records
11. The 1892 Homestead Strike
12. Morals and Manners: Middle-Class Society
13. Mrs. Vanderbilt’s Gala Ball
14. Populist Revolt: The Grangers and Coxey
15. Rough Riders and the Imperial Dream
16. No More Corsets: The New Woman
17. Trust-Busting in the Progressive Era
18. The 1911 Triangle Fire and Reform
19. Theodore Roosevelt, Conservationist
20. Urban Reform: How the Other Half Lives
21. The 17th Amendment: Democracy Restored
22. Early Civil Rights: Washington or Du Bois?
23. Over There: A World Safe for Democracy
24. Upheaval and the End of an Era

Decent Overview of the Period

This course gives an overview of the period in US history running from the end of the Civil War to the beginning of the 1920s.
As such it covers a lot of information dealing with the increased industrialisation and urbanisation of the US and the politics surrounding it. However because it is an overview it tends to present simplified versions of events and doesn't always make the links between varying ideas.
It is a very good beginning to understanding modern USA and is worth listening as it gives you the necessary groundwork to dig deeper into the issues.

Another great course by Professor O'Donnell

Professor O'Donnell's first series Turning Points in American History ranks among the best of the many The Great Courses series I have listened to, so I couldn't wait to tackle this new series by Professor O'Donnell which takes a deeper dive into the period from the mid 19th to the early 20th century.

I was tempted to get the video version because this time period is so rich with historical photographs, documents and political cartoons. However I had an Audible credit and and I knew from his previous course that Professor O'Donnell would be very highly organized and easy to listen to. I have no regrets.

In the end I have to rate this series just a notch below "Turning Points." That series was absolutely loaded with new insights and "aha" moments, whereas this one felt more like an entertaining race through time ( then again, it could be that I feel that way only because I recently listened to the outstanding Great Courses series on the Industrial Revolution and it covered much of the same time period).

Bottom line: I recommend it highly. If you are really looking to seriously study this era, then I might first get a global perspective from Professor Bucholz's Foundations of Western Civilization II," then move to this series, and then to Professor Allitt's The Industrial Revolution.

If you are looking for a broader view of major milestones in American history, then listen to Professor O'Donnell's "Turning Points" followed by Professor Stoler's Skeptics Guide to American History.

Parallels to our own time

This is one of the best Great Courses on history, covering a less discussed part of American history. One of my best aspects was the many parallels to our time - great wealth disparity, rise of populist movements, generational differences, concerns over immigration, technological revolutions causing worker displacement - but the professor doesn't present the similarities in any overt or political way, so it is there for the listener to discover. He has an interesting lecture style that always kept me engaged.

As other reviewers have noted, it is more of a social history than one focusing on politics, though I felt the political aspects of the time were covered appropriately.

I listened to all 24 lectures. I liked them and learned many things. But I found the choice of topics frustrating. There are many lectures devoted to saying things like "hey there used to be a lot of horses in new york and it was a big mess". To my mind, this is not the kind of material I buy a history lecture/book to learn. That material is more like what you would expect to hear from a grandparent talking about "life in the old days". In the background, we have reconstruction then Jim Crowe segregation. There are presidential elections - most of which are just mentioned in passing.

The lecturer also repeats material. This is true WITHIN this lecture series and across other courses he offers. It doesn't pay to listen to many of his courses.

I am not saying the lectures were bad, but I don't walk away having much more than a vague sense of the history of this period.

Good for what it is, but was hoping for more

This is a good overview of the times. Admittedly, I was hoping for more detail, specifically regarding the American politics of the times - the Presidents of the second half of the 1800s who are rarely talked about. Still, I enjoyed it.

Best audiobook recording I have purchased

Very interesting and easy to listen to. Great historical information that is presented extremely well.

A Great Look into a Not Well Known Era

Usually when you take an American History course the Gilded Age is not well covered. I only remember a little bit of this era from the history courses I took. So I came in with a small understanding of the era. After this course I found it to be the most fascinating era in US history. So many things happened during this time that still effect us. This is not only in regards to law but also culture.

Professor O'Donnell has a great voice and I found myself feeling a comfortable familiarity with him. He tells some great stories along the way too so you feel like the people in this era are truly people and not just listed names.

Sometimes you get a treat with some background music from the era. I loved that as it made the lecture feel really alive.

I think that this is an important course to get as it has a lot of correlation to our times. Many of the problems of this era are still going on today. Some examples are the rise of nativism, the huge rich versus poor divide and campaign finance. I would personally suggest this as a course for all of those reasons.

If you finish this book you will have a better understanding of how Americans will keep repeating History if they don't learn history 101. What a wonderful recap of how far America has advanced and how quickly we forget. Must read. Turn up to 1.2 for speed if you're already good at listening.

O'Donnell is enthusiastic and well organized

After having listened to Allitt's Industrial Revolution series, this course on Gilded and Progressive eras America is certainly superior and crafting a narrative. Civil rights, conservation, urbanization, unions, strikes, robber barons and Muckrakers are all covered very well, and very logically. O'Donnell clearly sees a larger picture for this era, and the battle between notions of individualism and common good in the American psyche play out exceptionally well in his lectures. For a survey course in this period, O'Donnell does a fantastic job in teaching American history.

One of the best Great Courses

Professor O’Donnell does a skilled job of breaking the various trends, developments and forces into coherent narratives. This is a fascinating period in American history which laid down much of the foundations of the society we have become. The Gilded Age and the Progressive era were opposing forces yet intertwined in ways which modeled the societal swings we have experienced ever since.