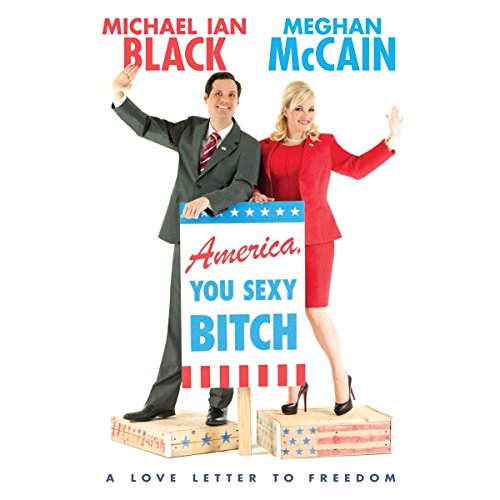 She is a single, twentysomething, gun-loving, Christian, Republican writer and blogger, the daughter of a senator and 2008 Republican presidential nominee. He is a married, 40-year-old, gun-fearing, atheist, Democrat comedian, the son of a lesbian former Social Security employee. Meghan McCain and Michael Ian Black barely know each other. But they are about to change the way politics is discussed in America.

In the summer of 2011, McCain and Black embarked on a balls-out, cross-country tour. Along the way, they spoke to politicians, gun lovers, abortion-rights advocates and opponents, gay parents, flag burners, Muslims, poker players, Tea Partiers, Minutemen, veterans, teen moms, bikers, fast-food workers, and a hooker or two. They toured the White House. They fired semiautomatic weapons. They stopped and ate at every Olive Garden along the way. But mostly they talked to each other about their differences and their similarities. It's Chelsea Handler meets Hunter S. Thompson in a political cannonball run across America.

What listeners say about America, You Sexy Bitch

...Not words that I thought I would use when I first bought the book. I thought it would just be funny, but it's actually a kind-hearted examination of what it means to be politically conservative or liberal, and the travails that Meghan and Michael go through to see each other's point of view as they travel across America.

I Had To Turn It Off.

What a wonderful, refreshing idea for a book - finally two people trying to show what respectful discourse can look like on the political stage. I praise both the authors for their wonderful intent and a good reading of their work.

That being said, I had to finally cut it off half way through. I really wanted to make myself finish, but I just couldn't take it anymore. The issue was not "Republican" or "Democrat". It was simply that - in my opinion, and my opinion only - one of the two authors was so much more mature than the other, and expressed their viewpoints so much more effectively, that the other author came across as childish and superficial whenever it was their turn to speak. The longer I listened, the starker the difference became; until I had to turn it off, because it was grating on my nerves. Add to this that (at least for the first half that I listened to) we never really got off the ground into discussing the meat and potatoes of the issues; much seemed more a simple travelogue, as they go to Vegas, and get lapdances... for love of country?

I'm not going to share which author was which in this scenario, mainly because I don't think it matters, and also because no matter which author I name, I run the risk of offending people and immediately having it attributed to some sort of political leaning, which I promise it was not.

I have a great deal of admiration for both of the authors for embarking on this project at all, and think the world would be a far better place if more people took a page from their book (if you'll pardon the pun).

Michael chooses to use the N word when quoting someone. I'm not down with that.

I loved this book! It was narrated by the writers and was an interesting, funny experience to "ride along" with Meghan and Michael, as they drove across the US. I learned so many things about being a Republican. The book was enlightening and I'll even listen to it again. I was laughing several times and listened to it in two sittings. I highly recommend it. A+

Remember when America had moderates?

What did you love best about America, You Sexy Bitch?

If you are a radical, you'll hate this book, but it is educational. This book shows you that there are still sensible American's on both sides of the political spectrum. Meghan McCain is the sensible, up-to-date republican, while Michael Ian Black plays the understanding comedic liberal. This is a story about what people should be thinking about America. It ignores the left- and right-wing balderdash spitting out of cable news, satellite radio, and premium television channels. No polarizing political crap in this book.

What other book might you compare America, You Sexy Bitch to and why?

It's a book from both sides. That's rare, hard to compare.

Did Meghan McCain and Michael Ian Black do a good job differentiating all the characters? How?

Yes. They are opposites, but they find common ground in America. They take turns speaking their minds and often match up in ideals.

Meghan McCain sounds like a teenager, but she has her ideas straight. Michael Ian Black is great.

Two sides to every story

What made the experience of listening to America, You Sexy Bitch the most enjoyable?

I enjoyed how the book's two authors would talk turns talking about the events taking place on the road trip. Both giving their side of the story.

If you could sum up America, You Sexy Bitch in three words, what would they be?

I wish I could find another book as amusing as this to listen to on my long commute! A great listen and an excellent message.

There is hope afterall ...

If you could sum up America, You Sexy Bitch in three words, what would they be?

I'm a political junkie! My husband is an Independent and I downloaded this book so we could listen to it on our long trip to a family reunion. My husband totally got into it. He enjoyed both sides of the issues. I was so glad that he enjoyed this book and it gave us some good discussions to have on the trip.

What did you love best about America, You Sexy Bitch?

I came into this book already a fan of MIB. I was not so sure about Meghan, but after devouring this book in less than a week, I have come to love them both so much

Be prepared to what an earlier reviewer warned you about - it is painfully cringingly uneven. Do not listen to it when you drive or in any other situation when you can't easily reach your fast forward/ next section button. Every segment is like a small story in its own right, so if you are getting annoyed by one author, skip to the next segment. Unlike that earlier reviewer, I listened to the end and I can tell you that the weaker one is not getting better. Approach it as a real life situation. Not all people are mature, or self-aware, or have writing skills, or melodious voices, but they are not going anywhere and it's up to you to decide if you want to listen, or switch off, or ignore. That much for 'America" and 'Freedom'. There is absolutely nothing about 'sexy', 'bitches', 'love', or 'letters.'