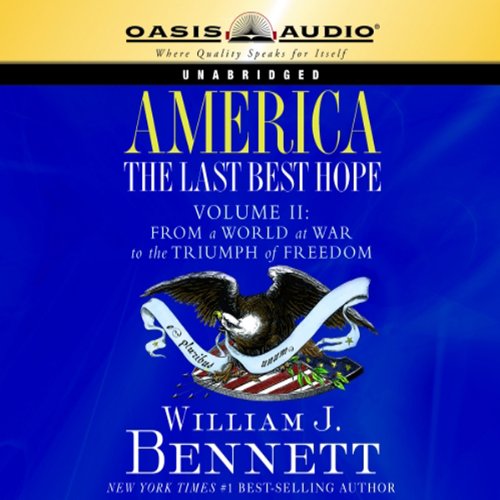 The Last Best Hope Volume 2: From a World at War to the Triumph of Freedom
By: William J. Bennett
Narrated by: Jon Gauger
Length: 20 hrs and 22 mins
Categories: History, 20th Century
3 out of 5 stars 3.0 (2 ratings)

The second volume of Bennett's overview of U.S. history begins with the events leading up to WWI, tracing the progress of the U.S. through the end of Reagan's presidency. Bennett has a long history of government service - he was Secretary of Education under Ronald Reagan and Director of the Office of National Drug Control Policy under George H.W. Bush - and the overall tone of the book reflects the deep respect he holds for America's leaders, history and institutions. Bennett is a leading figure in the neoconservative movement, so his interpretation of America's last 90 years is informed by that perspective.

But while he wears both his patriotism and politics on his sleeve, Bennett avoids flag-waving or talk-radio-style generalizations. This is a breezy, heartfelt survey, written with the average listener in mind, that will appeal broadly to those looking for an America-friendly introduction to 20th century U.S. history.

This was the Second book that I selected from my Audible membership and it too was well worth the investment. I recommend the book as part of a full home schooling agenda. It is a great history resource as part of the whole set. Dr. William J. Bennett knows how to put together a complete and true picture of our American History. This book picks up from World War I up to the end of the Reagan years.

Dr. Bennett's second installment of his history of the USA continues as a balanced, fair treatment of our country. He ties in global events when necessary to understand the context of events in the US, but his focus is on the greatness of our nation and its special place in human history. He treats minor historical events as what they are -- minor -- and gives world changing events their due.

Excellent! Why couldn't we have used this for our history text book in school? I thought you set the bar so high in Volume 1, I was excited to get vol. 2. You didn't dissappoint.

Great book just like the first. Bill presents the facts. The good thing about this book is it reminded of the events that has happen during my life time that back my memory.

The audio tracks from historical sources that are at the beginning of each chapter really add to the experience. Hearing parts of speeches from presidents and leaders like Martin Luther King make this much more than a book.

Volumes 1 & 2 cover a great deal of our history. Bennett does a great job in presenting the facts in an interesting manner. Highly recommended.

A very accessible history that recognizes the great and the not so great of the country.

This is the 2nd book in Dr Bennett's history series. I enjoy his teaching and explination. I didn't however like how he "added" his section about being Sec. of Education durinig the Regan administration. I'm not exactly sure why that info was important, other then to pump-up or remind readers of his role. It was unnecessary in my opinion. I would read the 1st in the series before jumping into this one.

I have no complaints about the book, only about how the narrator keeps mispronouncing names.