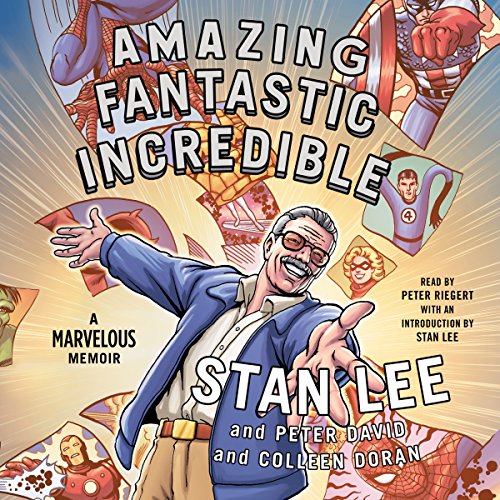 Stan Lee - comic book legend and cocreator of Spider-Man, the X-Men, the Avengers, the Incredible Hulk, and a legion of other Marvel superheroes - shares his iconic legacy and the story of how modern comics came to be.

Stan Lee is a man who needs no introduction. The most legendary name in the history of comic books, he has been the leading creative force behind Marvel Comics and has brought to life - and into the mainstream - some of the world's best-known heroes and most infamous villains throughout his career. His stories - filled with superheroes struggling with personal hang-ups and bad guys who possess previously unseen psychological complexity - have added wit and subtlety to a field previously locked into flat portrayals of good vs. evil. Lee put the human in superhuman and in doing so created a new mythology for the 20th century.

Stan Lee tells the story of his life with the same inimitable wit, energy, and offbeat spirit that he brought to the world of comics. Moving from his impoverished childhood in Manhattan to his early days writing comics, through his military training films during World War II and the rise of the Marvel empire in the 1960s to the current resurgence in movies, Amazing Fantastic Incredible documents the life of a man and the legacy of an industry and career.

Funny, moving, and incredibly honest, this beautiful memoir is a must-have for collectors and fans of comic books and graphic novels of every age.

Great stories.... a little short tho

Great stories and the reader brings big Stan to life to the point I forgot it wasn't him several times. very short though

Book over Audio on this Occasion...

The audio option fell a little short in my opinion, it went by a bit too quickly for a audio experience, felt the book would have been a better option, especially for this particular title.

My only criticism of this wonderful book is it is far too short apart from that it is perfect!
I stopped reading comics about 35 years ago but when I was a kid Marvel Super-heros were part of my life as was the legendary Stan "The Man" Lee, so it was so nice to find out a little more about him and how Marvel was run. I understand this was originally published a graphic-novel (or should that be comic?) so maybe I'll check that out too!

It’s ok, it wasn’t as in depth as you might hope for someone who has created so many good things.

A great life for the great Stan Lee. Very funny with some fourth wall brakes and great narration.

Stan is the man and this is his story (in brief). A fun and entertaining read.

Stan is 'The MAN!'. Listening with boys is best!

Excellent job! so awesome to listen to the story of how Stan came up with the characters that we have all learn to love.

A glorious conversation with a great story teller

Would you listen to Amazing Fantastic Incredible again? Why?

Having heard the whole story (very economically shrunk down to less than 2 hours), I look forward to hearing it again.

Stan Lee is an American treasure and in a league with Aesop, Doyle, Dickens, Steven King and World Wrestling Entertainment. "Just a couple of guys writing and drawing stories" have become a world-wide franchise and their characters beloved by millions.

What does Peter Riegert and Stan Lee bring to the story that you wouldn’t experience if you just read the book?

By turns humble, hilarious and intriguingly introspective, this is definitely a story only Stan could deliver.

This is an "American Dream" story - good guys working hard and (eventually) getting the success and accolades beyond their wildest dreams. Inspirational - with really awful jokes along the way.

Irresistible. I dare you to hit the stop button and interrupt this wild and wonderful tale.

It was so fun and entertaining! Definitely made my work day a lot better. Stan Lee is the man!!!

If you could sum up Amazing Fantastic Incredible in three words, what would they be?

'Nuff said! It emerges as a unique look at the history of a formative figure in the redefinition of the comic book form.

What other book might you compare Amazing Fantastic Incredible to and why?

None come to mind.

Have you listened to any of Peter Riegert and Stan Lee ’s other performances before? How does this one compare?

Unfortunately, I would have loved a lot more detail on Stan's memoir. Most of his stories are a couple of throw away lines leaving you wanting a lot, lot more.

There were some sound problems on my copy with the reader occasionally screaming then whispering at times. Both leaving me to fiddle with the volume, something I've never had to do before.

the man, the myth, the amazingly human guy! awesome tale of how it all formed.

a more accurate title would be " Stanlee rambles about his life and comics for 3 hours". Which means it's still a pretty entertaining 3 hours, but not a traditional sort of biography by any means.

Excelsior! Listening to the stories of Stan Lee's life is heartwarming and inspiring. The performance is upbeat and positive, just like Stan the Man himself. Well done.

Interesting story enthusiastically told. By the end I had forgotten it wasn’t Stan himself reading the tall tale of his ride to Marvel Deity!