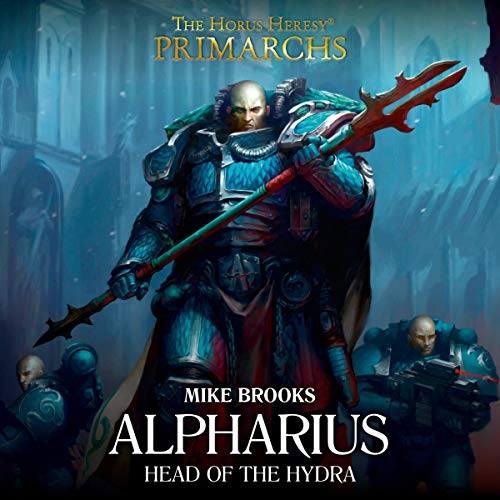 Alpharius: Head of the Hydra

Who better to relate the tale of Alpharius than the primarch himself? As he tells of his deeds, bear one thing in mind: nothing can be trusted when it comes from serpent's mouth.

Listen to it because:

I am Alpharius...and so are you.

Legends abound of the glorious - or infamous - deeds of the emperor's sons. Yet almost nothing is known of Alpharius, the most mysterious of them all, for the lord of the Alpha Legion is unparalleled in the art of obfuscation. Such are his gifts of secrecy and deceit that even his rediscovery has remained an enigma - until now. But when the tale comes from the serpent’s mouth, where do the lies end and the truth begin?

What listeners say about Alpharius: Head of the Hydra

A brilliant listen, with great narration. There are a few surprises that add a new element to the 40K setting. But most enjoyable.

A deep dive into the early life of the XX Primarch

For anyone interested in the alpha legion this is a must listen. Outstanding lore dump!

Best Primarch story to date in my opinion. An absolute must. My only gripe is that it's not twice as long.

Really good book with some great insight into Alpharius... as always, Jonathan Keeble delivers a fantastic narration of the book

This book was simply phenomenal. Really brought some more character to an individual who we do not know enough about. I shall not add any spoilers but the reveals within are brilliant and they really add to why the Alpha Legion act the way they do. Will probably listen to this multiple times despite knowing the story now. Highly recommend.

going to have to go over it again, lots going and with the twists in the story and leaves the biggest questions unanswered... viva Alpharius

i only wished it was longer!

From the first line to the last it held me to my chair. If only it lasted more ans gave us more info on the Alpha Legion Which is now my favourite legion by far!

This is a lie

Excellent story and highly recommended for any Horus Heresy/Alpha Legion fans. Easily one of the best of the Primarchs books and offers an intriguing look into either the true history of Alpharius or a well crafted fabrication.

one if the best do far

one of the best primarch books do far. just buy and listen. no more needs to be said 👌

Fantastic book about my personal favourite primarch(s). Definitely worth a read. . . . .

This book is dreadful. Didn't hold my interest at all...


I am Alpharius. This is a lie.

Slow and boring story nothing new was shared waste of a credit.


I am Alparius, this is a lie.

Alpharius is so well written. you get to see his point of view from the very beginning, and even explore the "lies" of how he was found, the origin of his weapon choice, and so much more. an absolute must read for all Horus Heresy fans

What if Jonathan Keeble is Alpharius?

Did you dig Legion and Praetorian of Dorn?
if yes, you will dig it.

That’s a lot of revelations

I know with the alpha legion everything is supposed to be a lie but when it comes to the writers putting something to paper, I figure it’s about as truth as it gets. A lot of info in this one. I think this book is informative about Alpharious as one will get for the next long while.

The 20th primarchs are mysterious by their every routine. Mike Brooks has written some really quality stories recently. This book is no different.

The challenge for newer authors in a series is always fitting their writing to the existing lore. Much of the book is solid here, but occasionally, the author paints characters in a curious light as compared to other recent writing.

One troubling trend from Black Library is the push for politically correct sentiments to flavor the books.

In this book, there is a particular section focusing on a same-sex couple raising a child. The fact of their being a same sex couple is entirely extraneous to the plot. There was nothing that was unique or added to the story with it, it could have been a single man, woman, or any couple. The only value to the element of these two characters' relationship was a normative push.

Some sci-fi readers actually DO HAVE A RELIGION which find being pushed on this a bit objectionable. Whether Muslim, Evangelical, Mormon, Orthodox, or Catholic, none of these groups go for this.

Why does Black Library want to marginalize those billions?

Similarly, there was an immigration sermon delivered at almost the same time in the book. Whereas this ACTUALLY WAS PERTINENT, it was layered on thickly.

I like Mike Brooks' work, but I think that he was shoehorned into these weird choices.

I am Alpharius. That is a lie.

Hydra Dominatus!
Excellent read for any 40K fan, an absolute must read for Chaos fans. Every word of it is true. That is a lie.

I always knew that Alpharius or Omegon where the first one found. I figured they where the ones behind the scenes looking for the other 19 brothers. How else did they find Russ or Angron.

Definitely worth the time.

This was definitely one of the more entertaining and enlightening Primarch books in terms of lore.

One of the best in the series

Title says it all.
Here are 15 more words to fill out the review
Beep Boop, Boop beep.