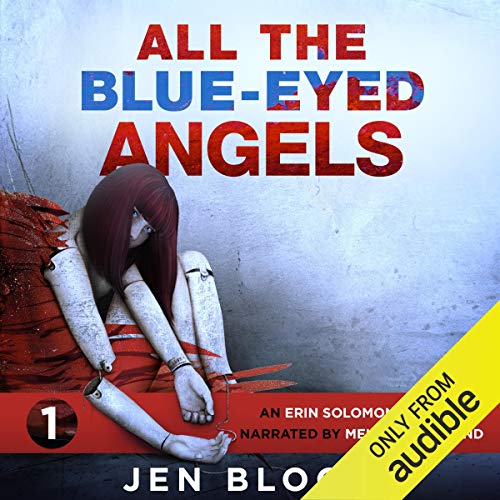 All the Blue-Eyed Angels

By: Ms. Jen Blood
Narrated by: Melissa Redmond
Try for £0.00

Jonestown. The Solar Temple. Heaven's Gate. On August 22, 1990, on a small island off the coast of Maine, the Payson Church of Tomorrow joins the ranks of those infamous cult suicides when 34 members burn to death inside their old chapel. At 10 years old, Payson member Erin Solomon watches helplessly as the church and its congregation are reduced to ash and embers.

More than 20 years later, Erin Solomon is an accomplished investigative journalist when she receives word that she has inherited Payson Isle...and all its ghosts. She returns to Maine to learn the truth behind the tragedy that has haunted her since childhood, aided by the rakish mentor who's stood by her side since she was a teenager; her trusty mutt, Einstein; and a mysterious stranger with his own dark past.

Soon Erin is enmeshed in a decades-old conspiracy rooted in lust, delusion, and betrayal as she fights to unearth the secrets of the Payson Church of Tomorrow - secrets someone will kill to keep buried.

What listeners say about All the Blue-Eyed Angels

I kind of liked this but found it a little hard to get in to initially as it felt a little jumpy between the past and present. Initially I wasn't sure I could stick with the narration but I got used to it after a bit. I liked the concept and ideas and think I would listen to more in the series maybe.

A thrill a minute!

A brilliant story diving in and out of the past with more twists and turns than a rattle snake. Melissa Redmond steps up to the plate and brings the story to life. As this is the start of a pentatology, don't expect all your questions to be answered but this is the sort of book where you stay up far too late trying to get to the end only to regret that it's finished...I can't wait to get book two!

This book was actually a pleasant surprise, I enjoyed it very much and will certainly be looking out for the Authors other titles and the 2nd book to this series.

Narration of the audiobook was good after she got "into the swing" of it, as at the beginning it was very monotone, and I was dreading listening to the rest.

The story follows Erin Solomon as she tries to find out what really happened to 34 people who died on a small island that she has recently inherited.

The story jumps between past and present to keep us in the loop and also throw in a few clues, but this was not confusing at all and I was able to keep up with the story.

I will certainly be reading book 2 in the series but I will wait for the audio to be released first.

could she speak any faster

couldn't get pass the 1st chapter , the story tell er just spoke so fast as if it was a race to finish 1st in a race.
It's a pity the story sounded if it would of been good.

I received this audio book in exchange for an honest review.

I thoroughly enjoyed this story. I thought that the mystery was well played out and the characters interesting. I really liked Erin as a character, she was brave, down to earth and likable. I enjoyed her friendship with Diggs and her less than stellar relationship with her mother was interesting. The story finished at a satisfying point but still had me crying out for the next installment.

The author did a great job with the atmospherics throughout and I found the town to be gloriously creepy.

Story is fun. Mystery is intriguing. Love triangle entertains. Could do without some of the swearing. But that's just me...don't like lots of swearing. This is a little more than I prefer. The Kindle ebook has a few weird typos that can make you stumble over a sentence, but I hope that doesn't turn a reader away because the story is good. I'm not sure about the Audible performance. I didn't like how fast the actor reads. Also, sometimes the actor reads so fast that she sounds a little muffled, and at times the audio rose significantly in volume and it sounded strange. None of these technical issues messed up the story for me. I hope it wouldn't bother anyone else so much that they wouldn't get to the end, which isn't fully wrapped up. So, I'll want to move on to book two and get to a resolution...it is a good read.

Starts slow but worth it

The narrator is a bit fast so I slowed to .9. The story starts off slow then draws you in. The end is a bit of a twist so well worth the time. I would recommend this book.

Convoluted story that made no sense at all. Was hoping the ending could somehow the it all together and salvage it, but no luck tthere! Don't waste your time on this one!

The narrator is horrible. I've listened and told many stories and she would bore the most ardent listener

Whatever good there is in this storyline, it is lost with the poor narration. She speaks too quickly with very little inflection. Very disappointing

Glad I stuck with it

At first I thought I had set the audio to read faster than the normal pace, then I was just frustrated by the narrator for reading so quickly and with almost zero affect, but by that time the story was drawing me in. I'm not sure if the narrator ever actually slowed down or I just got used to it but what I initially was irritated by became more an aspect of a first person voice of an investigative reporter and fit the story overall.
I do plan on spending my next two credits on the sequels but I'm very disappointed to find that the last two books in the series as well as the prequel are not available as audiobooks now. Especially because the series I was listening to before this has the same problem. It's extremely frustrating to find a likable series and then find that some but not all of the series on Audible.

All the Blue Eyed Angels is filled with turns and twist. Well worth the read

It took several chapters for me to get interested. The narrator didn't do the book any favors either. She was hard to listen to. The ending wasn't anything to warrant me buying the second book in series.

This is a really good read. Finished it in one day. Angst, mystery and suspense in equal parts is a wonderful recipe.