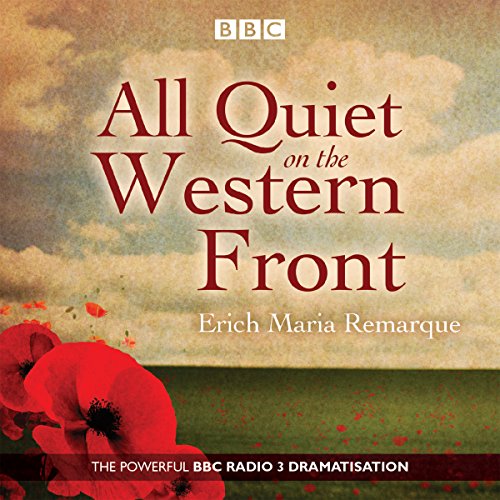 All Quiet on the Western Front: A BBC Radio Drama

A full-cast dramatisation of one of the greatest war novels of all time.

First published as a novel in 1929, All Quiet on the Western Front tells the story of a group of young German soldiers who are enduring, and then coming to terms with, the realities of the First World War.

At the age of 19, following the outbreak of the First World War, Paul Bäumer enlists in the German Army. He is deployed to the Western Front, where the experience of life and death in the trenches has an enormous effect on him. He begins to feel disconnected from his past life: his family, his love of poetry, and his feelings. As the war progresses, Paul becomes increasingly lost in battle.

Haunting yet comic, lyrical yet desperate, the novel became a best seller on its original publication. It inspired an Oscar-winning film of the same name, and has been adapted for television and stage. This powerful radio dramatisation stars Robert Lonsdale as Paul Bäumer, with a supporting cast including Simon Trinder, Stephen Critchlow, Carolyn Pickles, and Malcolm Tierney.

What listeners say about All Quiet on the Western Front: A BBC Radio Drama

Found this a good record of war & felt a bit upset afterwards which is what any rational minded person will feel. A good writer & well balanced account. No one should feel good after listening to someones feelings & diary entries about their war experience, but 10/10 for capturing the mood of what war is about, horror and physical and mental pain.

a great performance. good sound effects and intriguing insights into the every day effects of war on the soldiers on the ground.

This bbc radio program is very well acted. It is also quite thought provoking. A good drama.

Read the book before you listen to this.

It was really well dramatized but like in movies it was so condensed that the majority of the magic was muted because they sped through scenes that in my mind lasted hours.
This is really good if you want to refresh yourself on the events but not good as an introduction to the story itself.

Just listen to the book

Too much was cut, the voice acting is nice but not only is it shortened far too much but it butchers the final lines

There’s a reason this is recommended reading. This brief novel transports you into WWI trench warfare with all its fire and camaraderie. Some scenes are very like the movie 1917 which makes sense. I especially enjoyed the individual characters engaging with one another in the contrasting situations of tense battles and even fun youthful flirtation with local women.

Should be required listening/reading! Amazing performance. Keep me mesmerized and transfixed. Will recommend it to my family.