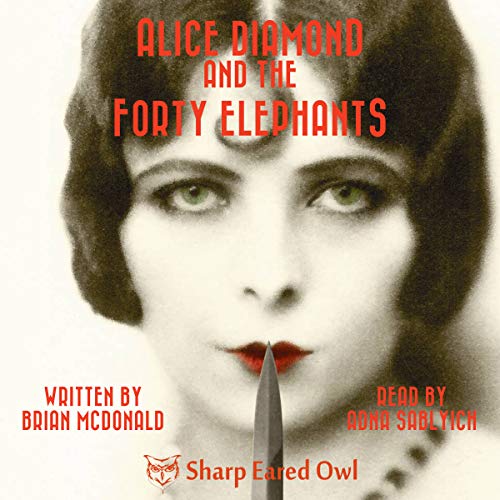 Alice Diamond and the Forty Elephants

By: Brian McDonald
Narrated by: Adna Sablyich
Try for £0.00

The Forty Elephants were unique in the annals of British crime. Known also as the Forty Thieves, they were the country's only all-female crime syndicate, a gang of tough but glamorous young women who plundered the fashion stores and jewel shops of the West End, took their lovers from the among London's most notorious gangsters, and terrorised their rivals, male and female alike.

Their roots lay with the Elephant Gang, a band of highwaymen who once haunted the Elephant and Castle coaching inn south of the Thames and whose reputation descended through generations of cutthroats. In the dying years of Queen Victoria's reign, their women forged a name of their own.

But it was in the early years of the 20th century that Alice Diamond led the Elephants to their greatest infamy. Born the oldest of eight children in Lambeth Workhouse Infirmary, Diamond was the daughter of a jailbird and by her teens was said to be the cleverest shoplifter in London. Newspapers described her gang as 'notorious for their good looks, fine stature, and smart clothing' as well as for stealing the most expensive silks, gems, and furs. One detective described how they would descend 'like a gang of locusts' in taxis and chauffeur-driven limousines, cleaning out a store inside one hour. They also used the motor-car and train to travel the country, targeting shops and warehouses, wearing specially made skirts and knickers to hide their plunder and spending their ill-gotten gains on a life of mad excess.

Crime historian Brian McDonald has uncovered a wealth of material to write the first ever full-length account of these remarkable women and their scandalous exploits, now available for the first time as an audiobook read by Adna Sablyich.

What listeners say about Alice Diamond and the Forty Elephants

It's a fascinating book as it is, but it's taken to a new level as an audiobook. The narrator brings history to life and walks you through the complicated threads and characters effortlessly. Fab listen.

I couldn’t even finish this one, due to the narration. I honestly can’t say if the story was compelling because I couldn’t get past the enunciation of nearly every word.