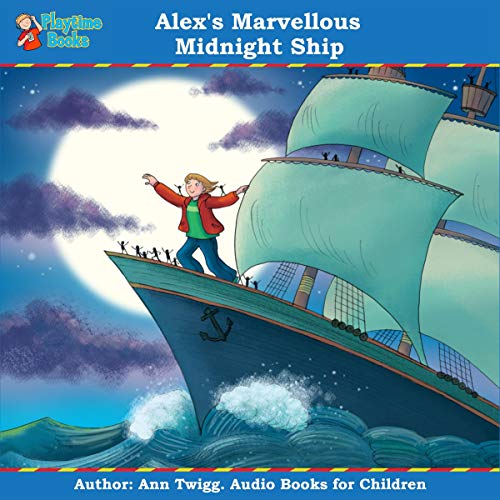 Imagination is something that every parent wants their child to use and foster. Imagination helps us to learn and grow. Kids growing up today in a world of technology often forget how to use their imagination and play. This story is about a little boy called Alex who has an inquisitive imagination and finds himself discovering something magical whilst out playing one day over the summer.

As Alex squeezed under the giant rock in the playground, he hoped that he would find some hidden treasure...but he was about to find something much better than treasure and be taken on an adventure he would never forget.

This book was written and narrated by Ann Twigg and is fantastic for helping children to understand the importance of play and imagination. Play allows kids to develop their creativity whilst using their dexterity, imagination, and cognitive skills. Play allows children to practice all the skills they need as they grow up. This book helps children to rediscover how to play.

Ann Twigg’s Alex’s Marvellous Midnight Ship is the second book in this series.

Let’s help children to re-discover the importance of play!

Scroll up to add to your cart...

Ann Twigg's Alex's Marvelous Midnight Ship is the second book in this series. Both are good.

fantastic to listen to.

Reminded me of all the traditional tales from when I was a kid. wonderfully narrated.

My kid loves it

Children growing up today in a universe of innovation regularly fail to remember how to utilize their creative mind and play. This story is about a young boy called Alex who has a curious creative mind and winds up finding something mystical while out playing one day over the late spring.

Works every time so far

Each time I play this for my 2.5 year old I think it’s not going to work because he is extremely resistant to nap time and settling at bed time. So far he hasn’t stayed awake past the 20 minute mark even w his toddler tricks (more water, stroke my arm, I’m a carrot etc..)!

Entertaining book for the kids. Went down a treat in my house!! This is an amazing little audiobook!

My 3 year old daughter finds this story really exciting, she asks for it again and again. I've noticed that it's inspired a lot of imaginary play when we go out to the countryside too

We listened to this following on from Alex's secret adventure but i dont think you need to listen in order. We really enjoyed this story and hearing about more adventures with the little people. It kept my daughters attention on the run to school. A lovely relaxing story that could be listened to at bedtime too due to the calm soothing tones of Ann Twigg. We listened to this on speed 1.5x. Would recommend both of the Alex adventures by Ann Twigg.

A tale of mystery and drama on the high seas!

Alex loves visiting his Grandma, especially when he gets to join the Little People on their exciting adventures! However this time Alex finds out that building work is threatening to destroy the Little People's home. Can Alex help to save his friends before the bulldozers arrive? An enchanting story which is sure to ignite the imagination of young children.

You don’t necessarily have to read Alex’s Amazing Secret before reading this but it would be more enjoyable to read both in order.

In this narrative Alex excitedly returns to his Grandma’s hoping to see the little people again, however is horrified to hear that their home could be destroyed. He obviously must do something to help and warn them. This leads to another adventure which as readers we are swept along on.

We loved the detail and easy listening of this gentle but exciting short tale.

This audiobook is absolutely adorable and great

This is a great collection of short bedtime stories. The collection contains a wonderful variety of stories containing everything you could want in a bedtime story collection. The stories are easy to listen and will keep your child entertained. They are very cute specially ALEX. Just be ready to be asked to listen the stories to your little one over and over again. Love it!

My girls love bedtime stories. This audio book is convenient because it has a collection of short stories. Listening to your children before bed a wonderful tradition to start. My 6 year is starting to listen these stories to her little sister, so cute. Thanks Ann Twigg.


If your family have child’s so you have buy this audiobook. Realistic books for children. Childs like adventure so that they maybe misplaced in the wrong way. But this audiobook make sure that your child gets fun in the right way. So much proud of the author.

Super duper series. First book was fantastic and second is superb. I love the sequence of the series. Ann Twigg creates a great series. Well done, sir. want to more of this series for my kids.

Adventure makes children Curious. 'Alex’s Marvelous Midnight Ship' is one of them. Whenever Childs listen that they want to have a adventure like him… A curious voice adds more curiosity.

my kid loves how alex had all his friends the little people are cute :)