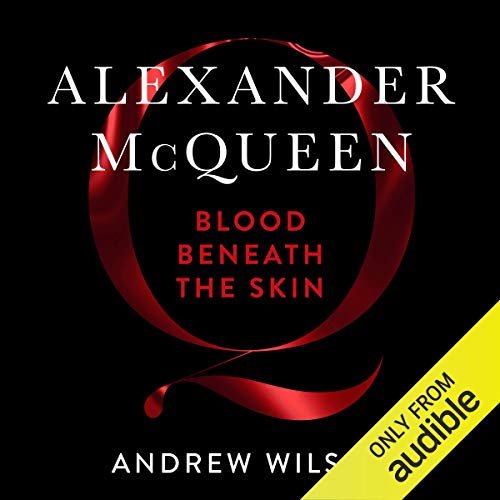 Alexander McQueen: Blood Beneath the Skin

By: Andrew Wilson
Narrated by: Piers Hampton
Try for £0.00

When Alexander McQueen committed suicide in February 2010, aged just 40, a shocked world mourned the loss of its most visionary fashion designer.

McQueen had risen from humble beginnings as the youngest child of an East London taxi driver to scale the heights of fame, fortune and glamour. He designed clothes for the world's most beautiful women, including Kate Moss and Naomi Campbell. In business he created a multimillion-pound luxury brand that became a favourite with both celebrities and royalty, most famously the Duchess of Cambridge, who wore a McQueen dress on her wedding day. But behind the confident facade and bad-boy image lay a sensitive soul who struggled to survive in the ruthless world of fashion.

As the pressures of work intensified, so McQueen became increasingly dependent on the drugs that contributed to his tragic end. Meanwhile, in his private life, his failure to find lasting love with a string of boyfriends only added to his despair. And then there were the dark secrets that haunted his sleep....

A modern-day fairy tale infused with the darkness of a Greek tragedy, Alexander McQueen: Blood Beneath the Skin is soon to be adapted for film, directed by Andrew Haigh (45 Years). This book tells the sensational story of McQueen's rise from his hard East London upbringing to the hedonistic world of fashion. Those closest to the designer - his family, friends and lovers - have spoken for the first time about the man they knew, a fragmented and insecure individual, a lost boy who battled to gain entry into a world that ultimately destroyed him.

What listeners say about Alexander McQueen: Blood Beneath the Skin

Fascinating and tragic account of a supremely talented but tortured individual . Would recommend to those interested in fashion and those who are not

interesting look at the fashion industry. its hedonism and colourful people .,of a flawed genius

Dark long but worth it


I was 17 when McQueen passed away and for me he was the essence of the fashion industry that’s lost it’s core a long time ago. His passing did something, and I think specially for upcoming designers and artist. We lost a friend. A father figure. The book is worth it’s time but it gets long at times... and a bit repetitive . Over all it did inspire me to keep my own work of art going. Also , i think it’s well written and the background story is thoroughly done and gave the biographies a good core to work around. It’s a good book not only for a McQueen fan but also to get som knowledge for him, the brand and what he did for fashion and made art history with. Even if it at times seems to be read by google it’s overall a soothing and good voice that reads it!

The author makes no apologies for Lee. The entire thing feels like a juicy second hand secret.

McQueen is made tangible in Wilson's masterpiece

Page by page Wilson draws you into the realms of tortured genius and creative passion!

The book is fantastic. Great insight into McQueen’s life, and the best biography to date. Save for a couple of examples where the narrator mispronounces a few words, it is very enjoyable.