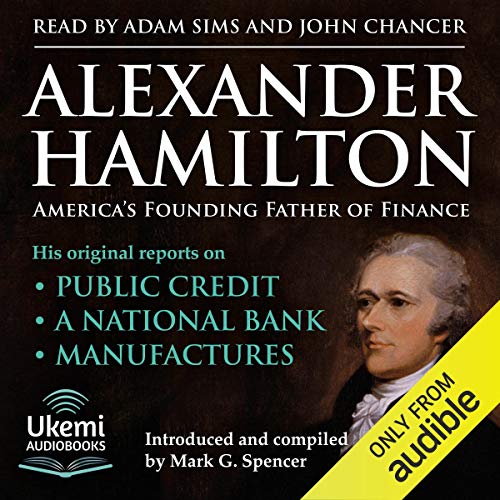 Though best known for his primary authorship of the Federalist Papers, his death in a duel at the hands of Vice President Aaron Burr on the banks of the Hudson River and his star role in a 21st-century musical, it is often overlooked that Alexander Hamilton was instrumental in creating the key financial building blocks of the young United States of America.

The first incumbent of the office of secretary of the Treasury on September 11, 1789 (under George Washington), Hamilton submitted a series of financial reports, meticulously researched, many of which, as Professor Mark Spencer explains in his introduction to this audiobook, became the economic foundations on which the US was built.

The three reports presented here are the most important: The First Report on Public Credit (1790), Report on a National Bank (1790) and Report on the Subject of Manufactures (1791). The exultation following the victory of independence was tempered by some harsh fiscal realities - not least the question of war debt. The war was expensive: there existed $54 million of national debt and a further $21 million carried by individual states. How were both these debts to be managed? Being appointed secretary of the treasury was a tough assignment, not least because Hamilton’s strong character often brought him into conflict with other major figures, including Barr and Thomas Jefferson.

Hamilton concluded that the nation should assume all the debt, aiming thereby to create a consolidated national debt. The Report on a National Bank was ‘the capstone’ of Hamilton’s transformative financial plan. Here, Hamilton called for the creation of a Bank of the United States which, among its functions, would be the supply of notes serving as the national currency. He concluded that the Bank would also provide a stable source of credit.

The Report on Manufactures was, as Professor Spencer explains, ‘a program for federal stimulation of industrial development in the United States.’ In this complex report, it has been pointed out, Hamilton articulated ‘a relationship between public and private interests and between the political and the markets, that is in marked contrast to the political economy of his Scottish contemporary Adam Smith’. These fascinating historical economic documents provide a breadth of understanding concerning the considerable contribution made by Alexander Hamilton during the formative years of the United States.