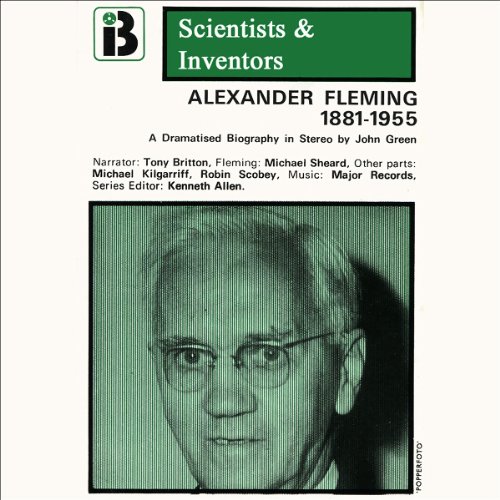 The world-changing invention of penicillin and the life story of its inventor are dramatized in Alexander Fleming.

Born in 1881 to a Scottish farmer, Fleming was a medical researcher whose greatest discovery came by accident. Coming back from a holiday in 1928, he noticed a mold in an old petri dish that had killed bacteria. It would take over a decade before his discovery would save lives in the form of antibiotics. For his work he received the Nobel Prize in 1945.

While one performer narrates key points in Fleming’s life in a plummy British accent, another assumes a Scottish accent in the role of the scientist at key moments in his life of discovery and accomplishment.

In 1928 Alexander Fleming came across some mould in an old culture dish; from it came one of the greatest discoveries of medicine: Penicillin, an antibiotic that kills bacteria without producing toxic side-effects. However, it wasn't until 1940, when two scientists at Oxford succeeded in demonstrating that the new drug could be purified and mass-produced, that the treatment of infections and infectious diseases was revolutionized. Fleming insisted on the importance of chance or luck in all scientific endeavour; without it Fleming would never have been a medical doctor, and humanity might still be waiting for the miracle of Penicillin.
©1976 John Green (P)1976 Ivan & Inge Berg

What listeners say about Alexander Fleming

A Lot Of Genius And A Little Luck...

That's what it takes to be an Alexander Fleming. Sadly, most do not know this man's name: any more than they know the names of some of those who worked in the same fields and are the reason most of us aren't dead: Domagk, Ehrlich, Lewis, Haber, Bosch... Perhaps some might pull up the name Pasteur, but what was the disease he found a vaccine for? (It was rabies.) Many remain virtually unknown, and some do not even have a wiki page: the chemists and bacteriologists who labored endless hours, often trying to outrun a deadly strain of infection or population-threatening problem that had already taken hold. Many, like Paul Lewis, literally sacrificed their lives, infected by the very thing they were investigating. Here, in this short dramatization, we discover a man we should already know as the one who stumbled across a world-altering discovery: penicillin. Humble man that he was, he admitted and even marveled at the happy accident that brought him to this thing that would so benefit humankind. But it could not have happened had Fleming not devoted his life wholeheartedly to benefiting humankind, slaving away, in near anonymity--which unfortunately, still remains--to give life and health to those of us who came after him, Listen to this wonderful little play, and file his name away in your memory banks. It is an important one in human history.