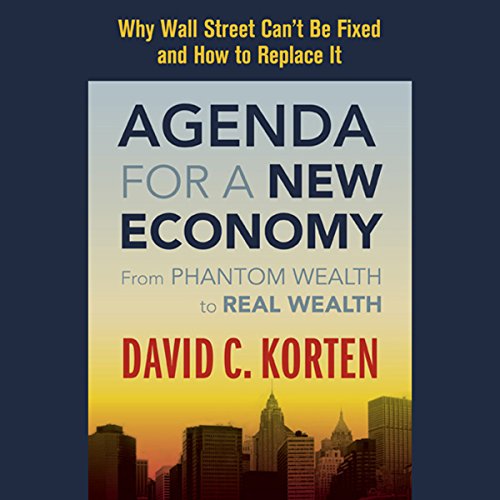 Agenda for a New Economy

Today's economic crisis is the worst since the Great Depression. However, as David Korten shows, the steps being taken to address it do nothing to deal with the reality of a failed economic system. It's like treating cancer with a bandage. Korten identifies the deeper sources of the failure: Wall Street institutions that have perfected the art of creating "wealth" without producing anything of real value: phantom wealth.

Our hope lies not with Wall Street, Korten argues, but with Main Street, which creates real wealth from real resources to meet real needs. He outlines an agenda to create a new economy - locally based, community oriented, and devoted to creating a better life for all, not simply increasing profits. It will require changes to how we measure economic success, organize our financial system, even the very way we create money - an agenda Korten summarizes in his version of the economic address to the nation he wishes Barack Obama were able to deliver.

What listeners say about Agenda for a New Economy

What disappointed you about Agenda for a New Economy?

Instead of understanding that capitalism isn't the problem it's the people who gain political favor that abuse the system that are the problem.
This author wants to create a hippy world instead. Which he can do. all the people who feel like him can go and buy a large plot of land and build that world. However he's not happy with that. He wants everybody to be suffer his utopia. Well one person's utopia is another's hell. The only true utopia is freedom for everyone.

Would you ever listen to anything by David C. Korten again?

Never never never. I wanted to throw-up so bad listening to is crap.

frist I had hope that he was going to talk about how we need to get back to making things and creating real wealth. But then ANGER for the last 2/3's of the book where he proceeded to spout communistic crap.

I want my credit back.