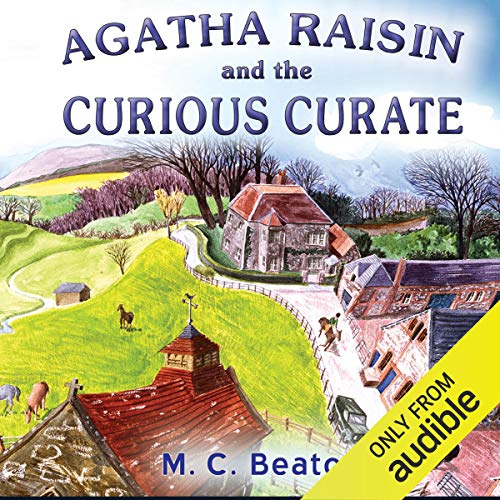 When the village curate is found murdered, retired PR guru Agatha Raisin vows to bring his killer to justice, particularly if the investigation also brings her closer to her handsome next-door neighbour, Colonel Lacey. Duck and Cover Still reeling from the death of their curate, the inhabitants of Carsely decide on Duck Racing and Morris Dancing to cheer themselves up. But the village Fete is unlikely to go smoothly while the killer is still amongst them.

Penelope Keith is a delight. These are fun little stories, when you need to zone out.

Getting better and better!

Every Agatha Raisin book I read is better than the last. I'm reading them in order, due to the backstory of Agatha's love life. This one was very good. I loved the suit of armour scene and the duck races. Highly recommend, can't wait to read the next one, The Haunted House.

Update: I have read all of them now, and re-read this one. It is one of my favourites, just as good as the first one. Read it!

I love the Agatha Raisin books and look forward to my hour before I go to sleep listening to them. However, the title of this implied two stories The Curious Curate and The Buried Treasure. The publishers review gave descriptions of both stories. Granted, It is unusual to have two stories but this book ended after the first. Am I missing something.

I have listened to and enjoyed all the Agatha Raisin BBC dramatisations. However these two dramatisations are definitely the weakest of them all. Pretty thinly plotted and not as entertaining as the others. Still worth a listen though if you need something light!

A witty and easy listen

Starts off quite good but gets a bit muddly.

I have listened to several of these books now, and always enjoy listening to Penelope Keith's soothing voice. Currently alone in the Shielding Group during the Covid-19 pandemic, I like to have Ms. Keith in the background. Somehow her correct English and pronunciation are a reassuring reminder that things will, hopefully, return to normal. However, as with all the Agatha Raisin stories, they are a bit silly and far-fetched, and get quite muddly and are not terribly well-written but are nevertheless enjoyable. Perfect for the current health and economic climate.

Agatha Raisin is as always.... good. So is Penelope Keith reading the story. I cannot imagine anyone else doing the dialogue. Agatha reminds me of myself.

What a great story, it is a true joy to listen to more of this package it provides a calming effect to drop off to sleep after listening

I love Agatha Raisin mysteries! This one kept me guessing until the end. I highly recommend these mystery books. Wonderfully written.
The narrator is very good. Easy to follow along with. Nice voice.

The narrator is marvellous and she makes this book a delightful bit of escapsim. Amusing and charming read.

I love an escape with Agatha! Great for listening to while doing other tasks since it doesn’t require in depth contemplation. Just light and fun as far as murder mysteries go.

It's a radio show

This is actually a recording of a radio show. Yet he actors are excellent and demonstrate the strength of Beaton's dialogue. However the annoying fiddle music and the announcer's input are distracting. Even though this version is cheap I prefer the traditional audio format

I absolutely adore the full cast show. It is well done and Miss Keith is perfect for the character. The only reason I gave it a four star is that they changed the voice of the original Roy and P.C. Wong. Otherwise I highly recommend it. Just like the old time radio shows.

Agatha Raisin keeps all the over-fifties challenged to keep excited and involved. Penelope
Miss Keith is the perfect voice for her and her stories.

I love her adventures, both personal and detectively. she is quite a unique person. I want to read all her books.