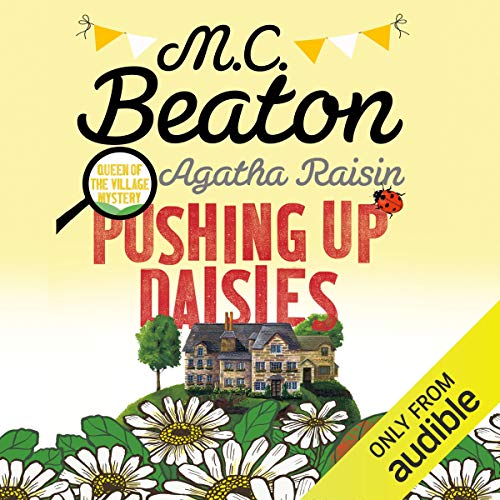 Allotment wars! Lord Bellingham, Carsely's biggest landholder, has enraged locals by saying he is going to sell off their allotments to make way for a new housing development. So when he turns up dead, poisoned by antifreeze, nobody mourns his passing.

On another fine summer's day, Agatha visits Carsley's allotments, where everything looks peaceful and perfect: people of all ages digging in the soil and working hard to grow their own fruit and veg. Agatha feels almost tempted to take on a strip herself...but common sense soon prevails. She doesn't really like getting her hands dirty.

She is introduced to three old-timers who have just taken over a new strip; Harry Perry, Bunty Daventry and Josephine Merriweather are lamenting the neglected condition of the patch. But as Harry starts to shovel through the weeds and grass, his spade comes across something hard, so he bends down and tries to move the object. And then he starts to yell....

The body is that of Peta Currie, a newcomer to the village - but who would want to murder her? Blonde and beautiful, she's every local male's favourite. And then Lord Bellingham's son engages Agatha to do some digging of her own, and very soon Agatha is thrown into a world of petty feuds, jealousies and disputes over land. It would seem that far from being tiny Gardens of Eden, Carsley's allotments are local battlefields where passions - and the body count - run high!

Pushing fans' loyalty to the limit

I thought the last couple of novels in this series (The Blood of an Englishman; Dishing the Dirt) were rather too frenetic, with outlandish plots, and with Agatha a thin caricature of her former self, sizing up every new male that she meets as a possible mate. That feeling is even more intense in this new one, where plot, motive and character seem to have gone to the wall in favour of pure 'activity', with Agatha and Toni separately driving endlessly from one location to another in search of a lead. (A lead to what? Who knows, as I forgot the so-called plot lines after Chapter Two.) So this story becomes just a dizzying cavalcade of slightly eccentric characters who enter, say their bit, and depart. It feels like a clutter of small vignettes pasted together into a hastily-assembled novel. As narrator, Penelope Keith is a wizard at instilling character and wit into each new voice, but even she has her work cut out attempting so many different people.

This lack of cohesion and apparent rush allows some silly mistakes to creep in, such as a main character's eye colour changing from 'hazel' in Chapter 6 to 'blue' in Chapter 7, and Sir Charles Fraith being referred to as a lord (by Mrs Bloxby, no less).

The biggest sadness in all this frantic coming-and-going is the loss of the charm and pace of the earlier novels. Agatha spends no time at all in her home village of Carsely other than to hunker down after another exhausting day on the road. The interesting regulars in her life (James Lacey, Roy Silver and Bill Wong) all make their mandatory appearances, but so briefly that you could blink and miss them. Sir Charles is here in abundance, but far more critical and less friendly and supportive than before.

But the most shocking change is to Agatha's best and most loyal friend since the first novel (The Quiche of Death, 1992) - Mrs Bloxby the vicar's wife. Not only has she cropped her hair and updated her wardrobe, but she's also apparently changed her first name from 'Margaret' to 'Sarah'. That such a glaring mistake can be made with such a beloved and long-established character demonstrates how little attention the author and editor pay to the integrity of this money-spinning series. For all our sakes, I wish the author would stop grinding them out once a year regardless of quality. And Audible Studios would be doing all us fans a favour by asking Penelope Keith to record the second novel 'The Vicious Vet', since the existing reading by Diana Bishop is so contrary to the spirit of the feisty Agatha that I can't bear to listen to it. It would be wonderful to have the whole canon read by the talented Ms Keith.

I feel sorry for any listener picking on this novel as their first venture into Agatha Raisin's world - they should try the excellent early novels, and avoid these latest ones at all cost.

Penelope Keith is back

I heaved a sigh of relief that Penelope Keith is back narrating. The story was good but I got a bit lost with the purpose of the investigation. Would love the books to be longer - 12 chapters is too short to get the twists and turns well and truly embedded. Still loved it though

As usual M C Beaton has written another excellent story.
I would recommend this one to all
For me Penelope Keith portrays all characters beautifully and is so easy to listen to

Well it's Penelope Keith narrating, what more do you have to say? Not had an audible book before so it was great to listen to as Penelope Keith is marvellous. The story is your classical British farce with a few twists and turns although I guessed it before the end. Good to listen to in the kitchen!

Agatha grows and grows on me!

Love all of M C Beaton books and when she writes under her other name of Chesney. So funny and Agatha is human with all the flaws a human should have. Brilliant!

I enjoyed Penelope Keith's performance, her various voices and characterisation. It was easy listening and entertaining.