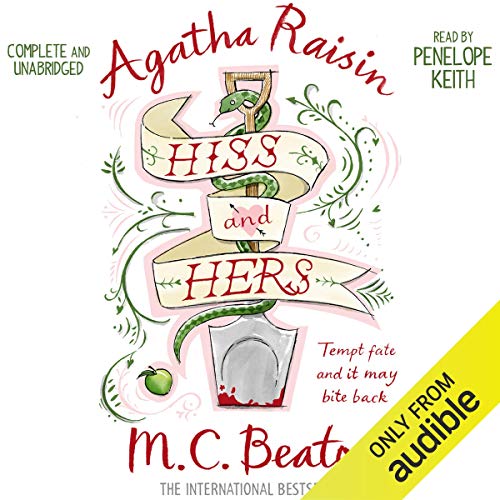 Agatha Raisin: Hiss and Hers

Agatha Raisin: Hiss and Hers

Agatha has fallen in love - again.

This time it's the local gardener, George Marston, she has her eye on. But competition for his attention abounds. With her shameless determination Agatha will do anything to get her man - including footing the bill for a charity ball in town just for the chance to dance with him. But when George is a no-show Agatha goes looking for him - and finds he has been murdered, having been bitten by a poisonous snake and buried in a compost heap.

Agatha and the rest of her crew plunge into an investigation and discover that George had quite a complicated love life. And if Agatha now can't have George, at least she can have the satisfaction of confronting those women who have and finding a murderer in the process.

What listeners say about Agatha Raisin: Hiss and Hers

Once again Agatha Raisin hits the mark, enjoyable to the end with such wonderful narration. A little escapism, a little fun and always a tittering moment within the pages.

A pleasure and just as good as the others in the series. If you want something unchallenging, entertaining that holds your attention then Agatha will not let you down.

Listening to an Agatha Raisin audiobook is like curling up under a merino wool blanket with a large mug of tea on a rainy afternoon. It is a comforting, entertaining listen that's easy to follow and doesn't lose too much if you're multi-tasking (in my case, marking 180 exercise books and fending off a tantrumming toddler).

If you want a gentle, humorous, entertaining whodunnit then this is it. Old fans of Ms Raisin won't be disappointed and, though I would advise anyone to start with the first in the series (The Quieche of Death) and work their way through, I don't think it matters too much in terms of following the plot if you're new to Agatha's antics.

Not a highbrow literary masterpiece; not an edge-of-your-seat, hair-on-end, scare-a-minute thriller... but it loses nothing for this - a rib-tickling caper with a few close scrapes thrown in - Keep them coming Ms Beaton!

I don't know why I keep reading these!

I seem addicted to these books although they do irritate me! Agatha never seems to get any older, drinks like a fish, smokes like a chimney and never does any exercise, but only seems to suffer from a dodgy hip. She seems to have no interests or intellectual curiosity (reading etc.)and despite her ridiculous need to wear makeup and over dress whenever a man appears, they seem to be falling over themselves to marry her! Once she does start a "relationship", she seems to revert to some sort of "50's" housewife and the men all become incredibly chauvinistic and controlling. The body count is on a par with MidSommer Murders and her legendary PR skills seem to usually involve providing a free bar! Nevertheless I seem unable to stop listening!

Agatha (Aggie) is a great character, eccentric, prickly, selfish and normal. I have read all of the Agatha Raisin books, it is difficult to choose my favourite, Hiss & Hers is an easy listen & Penelope Keith epitimises Aggie, she is Aggie! All the characters are brilliantly crafted & likeable. Should you need cheering up listen to this I defy you not to smile, in fact any of the series will make you smile!! These books will appeal mostly to women of a certain age, if that makes me ageist & sexist so be it, I won't apologise.

I enjoyed this latest installement of the Agatha Raisin series - they're not gritty, hard hitting or particulary believable but the characters of Mrs Bloxby, Bill Wong, Roy Silver and Agatha are likeable enough to keep you listening. Penelope Keith narrates this well and it was a pleasant accompaniment to a day's spring cleaning.

Better than I anticipated

I am reading/ listening to the Agatha Raisin books in order and am sad there are only four left. This one was better than the last with a compelling plot and all the usual humour. Penelope Kieth reads it beautifully. I listened to most of it on a journey by steam train to Scarbourough and back, so I will remember this one. Can't wait to start the next book!

Since the Agatha Raisin series is not available in German, I started reading them in English. Penepole Keith IS Agatha. I downloaded a lot of the audiobooks and after finishing one, I cant wait to start the next one.

read well, lots of character in the narration. however, not my taste of story after all.

A cast of annoying characters who are funny, engaging and yet enjoyable to read about.