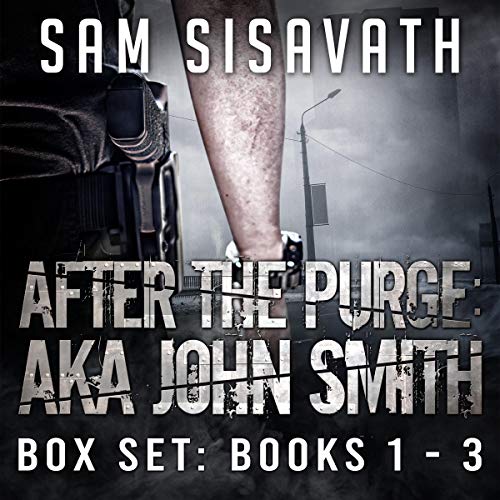 After the Purge: AKA John Smith Box Set: Books 1-3

By: Sam Sisavath
Narrated by: Zachary Zaba
Try for £0.00

Contains the first three books in the After The Purge: AKA John Smith post-apocalyptic western series. Including Mist City, Run or Fight, and Shoot Last.

Mist City: The shooter without a target.

The man who calls himself John Smith once had a reason to fight: He was committed to a crusade he was willing to kill and die for. Trained by one of the best gunmen alive, Smith’s natural instincts with a handgun were honed to almost perfection. But after suffering a devastating loss, Smith has turned his back on everything he once believed in. Now, Smith wanders post-Purge America, crossing paths with other survivors — some good, some bad, and some…unknown — while dealing with the monsters that still lurk in the darkness, forever waiting for unsuspecting prey.

Run or Fight: The road to hell is paved with good intentions.

All the man who calls himself John Smith wants to do is continue with his wandering ways. Explore the country and stay out of trouble, especially when it’s none of his business. Easier said than done. His life gets overly complicated when Smith runs afoul of a man who calls himself the Judge, as well as the people who are opposed to the Judge’s tyrannical rule. Two sides, both looking for an advantage over the other, and Smith has just landed smack dab in the middle of their ongoing feud.

He wasn’t looking for a fight, and he did everything possible to avoid one, but the Judge and his lackeys refused to let John Smith go about his way. Things got out of hand, people ended up dead, and now Smith is on the offensive. After being double-crossed, Smith returns to Gaffney, determined to conclude all unfinished business. It will mean taking the fight to the enemy at their own doorsteps, but Smith is just angry enough not to give a damn. They should have left him alone. But they didn’t. Now they’re going to learn that it’s not who shoots first that counts, but who shoots last.

What listeners say about After the Purge: AKA John Smith Box Set: Books 1-3

The performer butchered this book sorry but he just doesn’t have a masculine enough voice more suited for childrens book time at the library. Not only that it’s not monotone but you can’t tell a gun fight from a conversation just one rolls to the next. Also it’s Sig sauer not sig sawyer do a little research this author spent a lot of time writing this it’s the least you could do