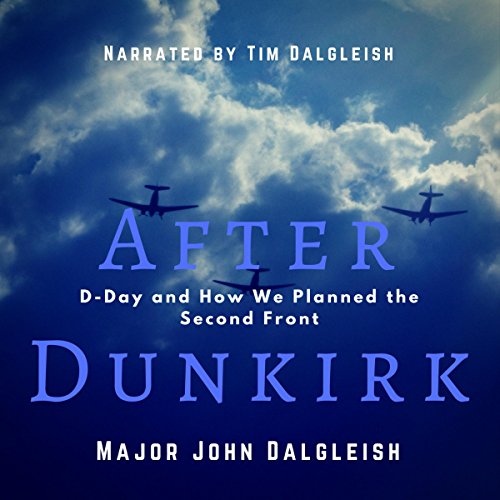 D-Day and How We Planned the Second Front
By: John Dalgleish
Narrated by: Tim Dalgleish
Length: 4 hrs and 55 mins
Categories: History, Military

In this minor war classic, first published by Victor Gollancz in 1945, Major John Dalgleish R.A.S.C., Daily Express journalist and BBC commentator, provides a short account of the planning for D-Day.

A complete history of the so called Second Front would run to a million words and still be incomplete. The present volume is intended to be a bird's-eye view of what happened behind the veil of secrecy, which shrouded the two years of planning, after the disaster of Dunkirk, and before the success of D-Day.

Major John Dalgleish R.A.S.C. was directly involved in the complex planning of the Second Front, the pre-planning for D-Day, and the Allied Invasion of France. He led a colorful life as a journalist for the Daily Express and as a BBC commentator. Later, he married a famous film star of his day, Wendy Barrie, who before she fell from the public eye, (due to an ill-considered relationship with the gangster Bugsy Siegel), starred in many Hollywood movies with the likes of Charles Laughton, James Stewart, Humphrey Bogart, Edward G Robinson, and many others.

After the war, John Dalgleish continued his sometimes, mildly nefarious lifestyle, by restyling himself as a businessman. He worked in the diamond mines of South Africa and introduced the first sapphire gramophone needles into Britain. He had mixed results in business and is described by Tim Dalgleish, the editor of After Dunkirk, as, "A cross between Oscar Schindler and Richard Branson."

He also published, I Was an Eighth Army Soldier, an account of the Allied Campaign in North Africa, and was editor of the war time newspaper, Tiger News. A new edition of the former, and an audiobook about the latter, are to be published shortly.

What listeners say about After Dunkirk