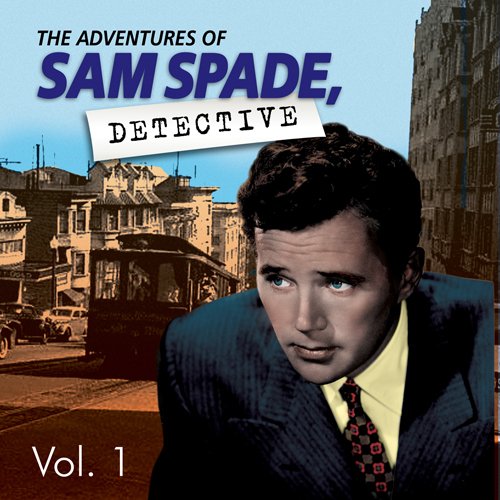 This collection of the Adventures of Sam Spade contains five episodes of the classic radio series:

This programs feature Dashiell Hammett's classic detective, who burst from the pages of The Maltese Falcon. Howard Duff plays Spade and Lureen Tuttle is his faithful secretary, Effie. The series appeared on three different radio networks: ABC (1946), CBS (1946-49), and NBC (1949-51). Toward the end of the series' run, Steve Dunne replaced Howard Duff in the title role. The program won a 1947 Edgard Award for Best Radio Drama.

What listeners say about Adventures of Sam Spade Vol. 1

I already wrote up a review for another of the Volumes, so these are going to sound pretty much the same (since I got them all and have them as one big mash-up on my player for car rides). If you like old detective stories, you will like these. Full cast readings, great stories, and like-able characters. The only thing that you should be aware of is that the recordings are really old so the sound quality sometimes is poor, but still a good buy.

For a "hard-nosed detective" the portrayal of Spade sounds like a combination of Lt. Frank Drebin (Police Squad / Naked Gun) and the wisecracks of Maxwell Smart (Get Smart). Plus the commercials are downright annoying. Save your money.