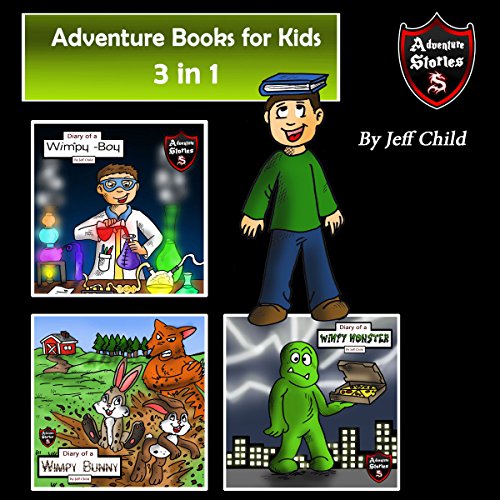 Adventure Books for Kids: 3 in 1

Adventure Books for Kids: 3 in 1

Three stories to tell your kids.

Diary 1: Meet Wesley, a boy with high intelligence, and a moral conscience. In his chemistry class, the teacher challenges all the gifted students to find a formula that can change the world. After heading to the school library, Wesley finds a dusty book with ancient spells, and potions recipes, with which the possibilities are almost endless. He succeeds, but wonders about the consequences of these potions. Listen to this intriguing children's story, in which a boy struggles with a moral decision, and acts according to his values and principles.

Diary 2: Bart the Bunny is a smart one. He is inventive, which shows after trying to use his sister's doll for a slingshot. His brother and he are innocently playing in the fields, until they discover a threatening creature that will bring the life of thousands of rabbits in danger. Will Billy and his brother find a way to trap the wicked hunter with its clever wits?

Diary 3: This is the story of a generous and passionate green monster who lost nearly everything, and climbed out of the gutter to follow his passion. Cory the monster is a lonely creature by far, with vengeful tendencies, but his life gets turned around when someone performs a kind deed, returning the favor. Listen to this audiobook about this monster who found his purpose, and changed his path.

So impressive book about the book for kids. This book consists of great stories that I am pretty sure kiddos would love it.

He joins a criminal organization and performs every task they give him. Robbing, scamming, and helping with various other criminal acts

Pedro doesn’t have a lot of money, and with the unemployment rates in town, he needs to figure out a way to pay his rent fast.

I sure would, its a great book and a great performance by John H Fehskens. It's perfect story about hope and friendship . I have read listen this book twice, and I think it my favorite book now.

Totally all was good.... This is one of her favorites and she loves listening it on my ipad. Its nice to have a cause and effect book for little ones to listen to.

I highly recommended it

Excèllent content.I enjoyed listening this book a lot. I will share this book with my friends who have kids too.I highly recommended it

No image change or anything. Bored my child to sleep. Would be nice to have the words on each picture and story goes on.

This book offers interesting stories for children. Stories are written in a simple way, and they are very educational. I believe that these books will be interesting and for older children, not only for pre-school children.