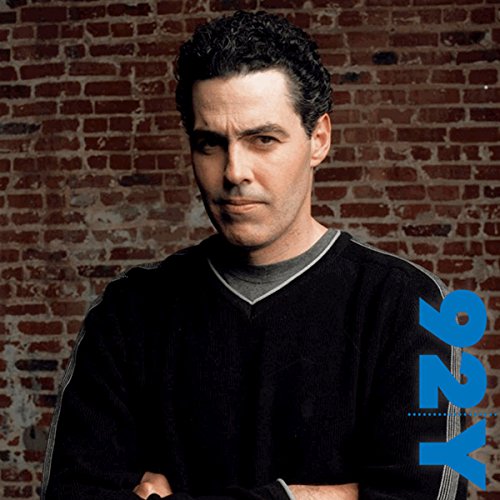 Adam Carolla has made a name with his bitter but hilarious rants on politics, people, and pop-culture. In this episode of Live at the 92nd Street Y, Carolla talks with Will Dana about his career and the media. Carolla is, as always, a hilarious guest. Will Dana also proves to be entertaining and the two men act as a kind of comedic duo. But don't be fooled, this recording is more than just simple jokes. Carolla has deeper concerns about love, life, and the art of comedy.

Adam Carolla’s signature “rage” bits have become an integral part of his act, most recently as a recurring segment (“This Week in Rage”) on CBS Radio’s morning talk program The Adam Carolla Show. He is known as the co-host of the radio television show Loveline, co-creator and co-host of Comedy Central’s The Man Show, co-creator and the performer on Comedy Central and MTV’s Crank Yankers and former contestant on ABC’s Dancing with the Stars. He is the author of In Fifty Years We’ll All Be Chicks… And Other Complaints from an Angry Middle-Aged White Guy.

I wish I would have read the reviews

It’s not a book. It’s an interview of Adam Carolla and it was entertaining enough, but I was expecting a book. It was really expensive, and I’m considering buying one of his other books so I wanted to see how his books read. I still don’t know. I don’t know whether this is Audible’s fault or Animal’s fault but I’m not sure I’m going to buy one of his books. Edit—Not sure how that fourth star showed up, and I don’t seem to be able to delete it.

it's not a book

it's basically a live podcast. I love listening to Adam but this isn't a book.

What disappointed you about Adam Carolla: An Angry, Middle-Aged White Guy?

I love Adam Carolla and saw this and purchased .. but it was more of an interview and the quality was really not that good you had audience questions that you really could not hear.. This is not a book and I felt mislead.

Would you ever listen to anything by Adam Carolla again?

yes but will buy carefully

Audible should clearly highlight this is not a book

More autobiographical than flat out funny.

I really like Adam, but feel mislead on this one. I hope he will write more books. This was just an interview .

Would you listen to another book narrated by Will Dana?

Could you see Adam Carolla: An Angry, Middle-Aged White Guy being made into a movie or a TV series? Who should the stars be?

NOT TOCA BELL MATERIAL would make a good movie. I think all of us knew guys like him in high school. He is so-o-o-o authentic!!

It’s like watching regular tv but you keep hoping for commercials because they’d be better. You know. Like the Super Bowl.