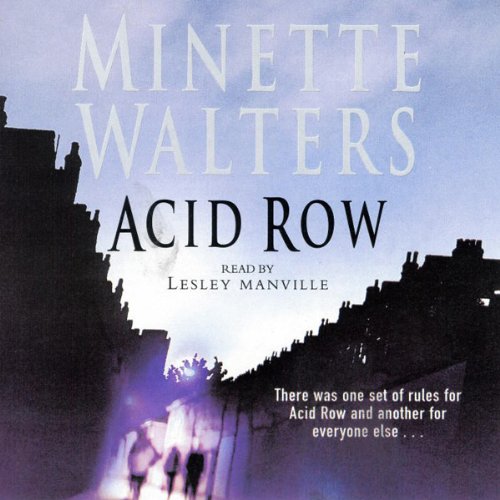 By: Minette Walters
Narrated by: Lesley Manville
Try for £0.00

Acid Row: It's the name the beleaguered inhabitants give to their "sink" estate, a no-man's land of single mothers and fatherless children where angry, alienated youth controls the streets. Into this battleground comes Sophie Morrison, a young doctor visiting a patient in Acid Row. Little does she know that she is entering the home of a known paedophile...and with reports circulating that a tormented child called Amy has disappeared, the vigilantes are out in force. Soon Sophie is trapped at the centre of a terrifying siege, with a man she has come to despise. Whipped to a frenzy by unsubstantiated rumour, the mob unleashes its hatred.

"Protecting Amy" becomes the catch-all defence for the terrible events that follow. And if murder is part of it, then so be it. But is Amy really missing?

What listeners say about Acid Row

I only chose this book because it was cheap and I had run out of credits, but I think it is possibly the best I have listen to so far. The twists of the story and the interesting thoughts behind the plot line are so well researched. To add to this the narrators voice is relaxing, but without being a drone that just sends you to sleep.

I absolutely loved the story! easy to listen to & gripping. I would listen again

Searingly grim depiction of mob rule on a run down housing estate in the noghties.

So good, I had to read the Unabridged version

I have only recently started listening to Minette Walters books and am now addicted. This book was so good, I had to track down the unabridged version. Lots of twists and turns in the story and the characters. A great listen!