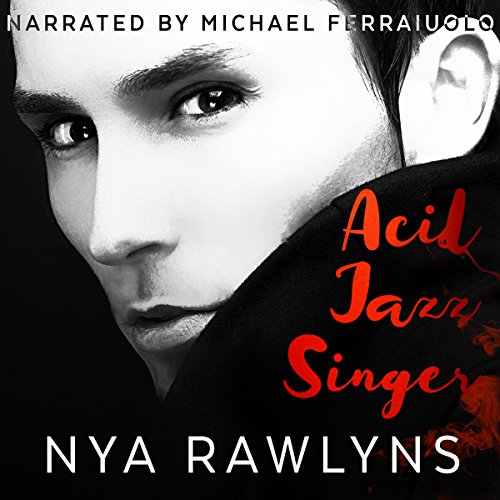 Her name was RayLee. They called her the Acid Jazz Singer, her sultry voice mesmerizing human and demon alike. She'd been running for three years from her maker and only Travis McKenzie stood between her and the darkness that had become her life.

Travis hunted the hit squads of demons and paid lip service to the sheriff of the city. The half-blood had gifts of the magic shifting kind - and something more. It made him a stone cold killer and the only thing that mattered in his life was safeguarding the woman he was falling in love with.

The singer and the protector had a history. But that history changed when a southern bigot vamp turned Travis' friend into a travesty - neither man, nor woman - but both. Travis fell hard for the trans known as RayLee. He was having a harder time dealing with his best friend, Ray.

Then the game changes, and Travis and Ray have to rely on an assassin with a secret agenda and uncertain loyalties.

Vladimira was the oldest of her kind, an enforcer - a gun for hire to the highest bidder. Vamp, human, demon. It didn't matter. It was all about the job - until the stakes changed and she found a reason to care.

When the demon comes to claim Ray, Travis must walk through the bowels of hell to save the only being on earth he cares about.

The problem is - who is going to save Travis from himself?

What made the experience of listening to Acid Jazz Singer the most enjoyable?

I really loved how this book drew you into this fantastic story.

How can I pick the best part of this book, sorry just not possible,if you want to listen to this book, you will fine you get drawn into the story.

Oh yes I laugh, had tissues by my chair, I wanted to say to one oh for goodness sake,

So very well written I loved this so much. The characters are so well written with their little quicks, I would definitely listen to to this book again.

Wow what a ride

To be honest I'm not sure I would have chosen this audiobook book myself but after listening to it I would have missed out on a fantastic story. I was so caught up in what happens to Ray/RayLee and Travis that I had to know what happens next. The story kept up a good pace but the flashback sections did leave me a little confused at times and I had to listen to that bit again. But the journey is so worth it. Travis never seems to get a break and it makes an exciting story.
I applaud the unique characters created by Nya Rawlyns. They inspired so many feelings in me. There were times I loved them, hated them, felt sorry and angry and cried for them. I felt for RayLee trapped partway through transition, never being able to finally be who she is. And Travis having difficulty understanding his feelings for him/her. Into the mix comes a Vampire for hire. Is she after Ray/RayLee or Travis? More questions and suspense. This is a superb start to the series and I am eager for the next part.

Michael Ferraiuolo's excellent narration along with the detailed descriptions made such a vivid picture. The story is told from Travis's point of view and Michael Ferraiuolo's characterisation of him really brings him alive. I also liked the defined switch between Ray and RayLee. If you like action and suspense with a touch of romance I absolutely recommend listening to Acid Jazz Singer.

This book has an intriguing concept - a transsexual turned into a vampire mid-transition, that is, he/she had the silicone implants done, but not the bottom surgery yet. Trapped between the sexes, she works as a drag queen. Her best friend, a man named Travis, who she has known since he/she was in the military in Afghanistan, is a demon hunter and, although straight, he is starting to have feelings for Ray/Raylee.

The problem with this book is that it was hard to follow for the first half. It kept transitioning back and forth between the present and flashbacks, but there is more narration in the first person as Travis than there is dialogue. At times, Travis would be describing one thing and then I'd realize he'd gone into a flashback with no real separation or transition, so I had to keep playing sections back to figure out what was going on. By a little past the middle of the book, the flashbacks stopped and it was straightforward from there.

However, Ray/Raylee was talked about a lot by Travis, but the focus was on Travis and not on Ray/Raylee, the title character.

Honestly, I'm not sure how I felt about this book. Maybe if I listen again it would make more sense, but for me it wasn't bad, but it wasn't great. It ends with a cliffhanger, and I am honestly not sure if I want to read/listen to a sequel.

What did you love best about Acid Jazz Singer?

it was a different type of story... i enjoyed it.. the characters were different and unique

Which character – as performed by Michael Ferraiuolo – was your favorite?

oh man.. he put amazing thoughts and feelings into his characters. i'm not sure which was my favorite to be honest.. probably ray though honestly..

no.. i mean i laughed a lot.. and there were a couple times i wanted to throw something at a wall haha but it was all amazing

This book was one hell of a bumpy ride, in the best of ways!
I was immediately thrown in, no life line, and the story ebbed and flowed around me- dragging me along. I was very confused throughout the book and I am not sure I like that confusion because it felt like I needed answers and had too many questions when it was done that had me frustrated and not intrigued. Nevertheless I feel like this was an amazing book I need a few more time to fully process, there are so many things going on at once and you don't get a breather. It was both exhilarating and annoying, and I was constantly at the edge of my seat and could not &quot;get my footing' in this book as a reading experience it was unique and unlike most books I had read so far (and I have read many) and certainly unlike most M/M books I read. I feel like I need more and I am angry I don't understand what is going on, I hope the next book sheds more light on it because the ending is not only no-HEA but cliffhanger-y and I am dyeing to know!
I both liked and hated the characters, and I feel this is another great thing about the book, it's not about perfect pure guys, the world is cruel and corrupt and Ray and Travis try and survive it. There was so much left unsaid that I am undeceive about the book: on one hand I wished I understood it more but then again it's part of its uniqueness and maybe then I would not like it as much. Bare in min de it’s not a lighthearted read but a gripping twisting path that will pull your feet from under you and any chance it gets. As complex as it is the world is still interesting and does not feel made up and underdeveloped, just unclear as many details are spared from the reader. As plot lines go this makes the book a full body experience and keeps you and the characters on an even playfield (most times). I still which I had some answers because at times it was a bit too much. They are as much in the dark as the reader is.

The narration was amazing, every emotion and nuance was utilized, it felt real and I was there with Travis as one thing after another went wrong in his and Ray's barley held together world.

the narrator has a nice voice but for me this story was a little hard to follow.