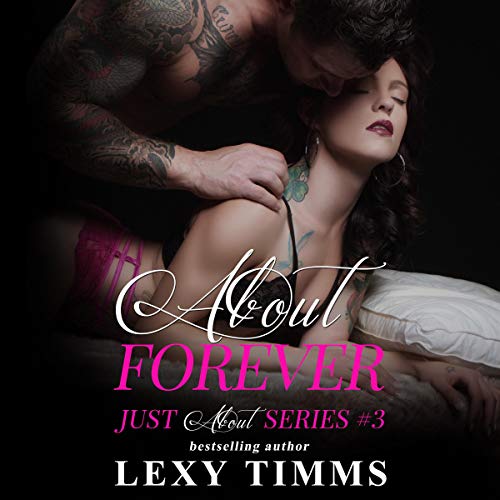 By: Lexy Timms
Narrated by: Hannah Pralle
Try for £0.00

USA Today best-selling author Lexy Timms brings you a new series About Love and everything in between the road to forever.

There comes a time, even in the hottest relationship ever, when enough is enough. But cutting off the magnificent and gorgeous bad boy Sasha Petrov is like cutting off an arm; Kallie Margolis just can’t do it. It’s not the lavish houses and attention she can’t leave behind - it’s him. His dangerous charm and once-in-a-lifetime passion. If anyone had told her before she left town on the fly that Sasha wasn’t right for her, she couldn’t even imagine it.

But once again, Kallie finds herself waking up in rustic, beach-front digs trying to make sense of it all. Getting away to sort it out isn’t an option, because Sasha is always one step behind. He lures her back into his powerful arms just by being near. He tries being cold and callous to teach her a lesson for taking off, but he can no more be angry with her than she can break up with him. When things look like they’re going to straighten out for the two of them the never-been-caught street-smart Sasha is arrested, this time for a fairly serious crime.

He’s a self-employed businessman who unapologetically deals with things not quite legal. Will the fallout of his shady pursuits be the end of the sweetest love Kallie believes she will ever find? Or will Sasha beat the odds and make it back to Kallie’s bed, and into her heart for good?

What listeners say about About Forever (Steamy Bad Boy Romance)

this book was disappointing. I really enjoyed listening to the other 2 books. this one lost me when you lost the Russian accent then as normal you just got to see it though to the end. overall the series was going well.

Great end to this trilogy

This was a great ending to this trilogy. I really enjoyed the storyline and the characters were fantastic. A good performance from Hannah.

This is the final book in the series. I feel like Kallie was a pain .
I did enjoy the story, though, and would recommend it to anyone who likes bad boy romance books.

This is the final book in Sasha and Kallie's story. Regardless of the way their story ended, I feel like Kallie was more trouble than she was worth and their relationship was no good for either one. I did enjoy the story, though, and would recommend it to anyone who likes bad boy romance books. This is my first Lexy Timms series but I will gladly listen to other books she's written. While Hannah Pralle did a good job narrating this book, I was rather disappointed that Kylie Stewart and Eric Rolon didn't continue with their duet narration on this book. Eric had such a sexy Russian accent for Sasha that totally disappeared in this book. I received this audiobook at my request and have voluntarily left this unbiased review.

As always, Lexy, this was a great book. I can count on you to bring the story to life. I would've liked to have known about how much Sasha straddled the line between right and wrong, but loved it anyway!!!!