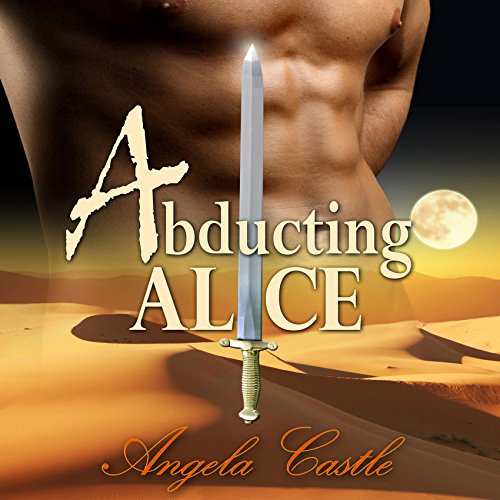 For someone who thinks rocks are more interesting than men, geologist Alice is proven how very wrong she is. When a probe crashes to Earth near a dig site, Alice Clarkson thinks she has hit the jackpot of her gem collecting career finding a real life meteor to add to her collection. But this is no mere meteor. It's an alien probe designed to capture life; specifically female life.

Abducted and placed on sale in an alien slave market, Alice soon discovers the pleasures of being a captive in the arms of the sexiest alien man she's ever laid eyes on. Kerr, high commander of Kelon warriors raids a slaver station only to find a small human treasure he want to keep as his own.

Great story but I the narrator needs replaced

Would you consider the audio edition of Abducting Alice to be better than the print version?

I bought this book when it came out and was delighted to see that it came out in audio format. The audio version is unabridged so it's exactly like the book but I was disappointed in the narrator.

What other book might you compare Abducting Alice to, and why?

There are a few alien abduction books out and about including fantastic works as Grim by M.K. Eidem and Jo's Journey by S.E. Smith.

I didn't like the performance by Jennifer Cliff, the story didn't flow well and her Australian accent made the characters sound dumb and slow witted. I was disappointed that a book that I originally quite enjoyed left me feeling deflated.

I wouldn't make a film of this book

To be honest this was not worth the money for the download.

OK, this alpha captain/commander alien finds this abducted human on a slavers ship during a battle. He slings her over his shoulder and puts her in his room until he finishes his command business. Then he wakes her up and they have the equivalent of an “alien one night stand”. There is a brief sentence or two of objection on her part then they do it over and over. Afterwards, they are mated and are tender to each other. But where is the build up and getting to know each other that true caring and real tenderness comes from? In essence, I am saying this is supposed to be a romance but I can’t suspend disbelief enough to find this romantic. I like steam and sex but there needs to be some romance to make it appealing. After that beginning the story didn’t grab me and I stopped half way thru. Therefore, I found this publication a disappointment..give me a Ruby Dixon any day.

I did think the narrator did a good job. I will admit that I am no judge of the accuracy of her Aussie accent but she flipped in and out of her accents seamlessly. I find an Aussie accent so appealing!

I listened to this book because of a romance challenge. That being said I really enjoyed it and can see myself listening to the next in this series as well. It was cute listening to Alice trying to teach different meanings to words from earth that were not translated well. I hope there is a bit more of that in the next book.

Would you try another book from Angela Castle and/or Jennifer Cliff?

i don't think so. I enjoy unusual stories with aliens and other different characters but the story was predictable but the narration made it extremely difficult to listen to.

The ending was predictable.

Jennifer Cliff should not attempt accents.

I'm really glad I didn't waste a credit on this book because of the new Romance package.

Cute Short Story if you can get past the Narrator

cute short story, light and easy to listen to - not a lot of depth but it's a short story. The narrator however almost made me give up. It was a chore to get past the horrible accents to hear the story. Either computer voices or a really bad aussie accent took away from the book. Also, makes the female lead sound like bad one liners with exaggerated pauses which compounded the bad accent.

Out of this world fun

fun and enjoyable listen...... A nice change from the mind games of other romances.....

Australian accent Terribly done, why in the world would you think thats Ok to put us through that?

I was not impressed with the narrator's voice. she sometimes sounded more computer than human and also her Australian accent was terrible.

What did you love best about Abducting Alice?

The story is one of my favourites and I like the whole series. Alice is the first to make the change from Earth to Kelon. She finds love with an amazing person on a new world in the midst of inter-galactic war.

What was one of the most memorable moments of Abducting Alice?

The best moments are Alice's rescues and teaching Kerr about love, human style.

The narrator is terrible at an Australian accent. I hope she is not signed for the whole series. This should be re-recorded by someone who can read the Australian dialogue properly so Alice and her sister Tara sound like they come from Sydney and are different people. Alice is well educated and well traveled while Tara is not. The same problem occurs in the second book and in the introduction to the third book.

Yes, some of the scenes between Kerr and Alice and then when he rescues her a second timefrom the one who has chained her.

The narrator is terrible at an Australian accent. I hope she is not signed for the whole series.
This accent was almost enough to make me turn off the book. It is very disappointing when a story you like is so badly done.