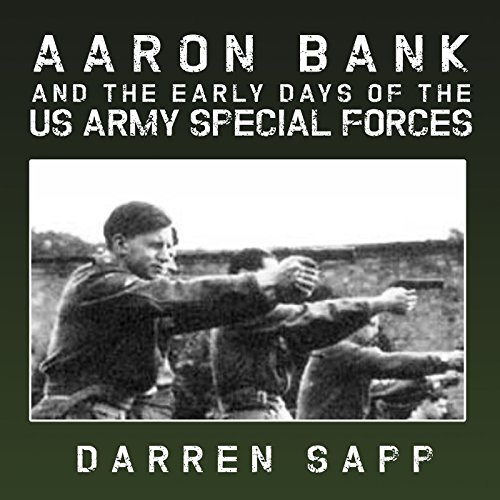 Aaron Bank and the Early Days of US Army Special Forces

By: Darren Sapp
Narrated by: Dean Wagner
Try for £0.00

Aaron Bank was an OSS Jedburgh in World War II and the subject of William Donovon's quote, "Tell Bank to get Hitler." He'd later become the inaugural commander of the 10th Special Forces Group, earning the moniker Father of the Green Berets. The development and use of unconventional warfare in WWII created a desire to develop permanent units for future wars.

Bank parachuted with three others behind enemy lines in France to work with the French Resistance in harassing the Germans retreat from Normandy. He followed that action by recruiting former Wehrmacht soldiers with anti-Nazi sympathies to kidnap Hitler and other high-ranking officers in the Alpine redoubt. Although that mission was called off, he gained more experience with a POW rescue mission in Indochina, even spending time with Ho Chi Minh.

These World War II experiences, followed by service in Korea, shaped Bank's view of the need to make an OSS-type force permanent in the United States Army. Under the leadership of Brigadier General Robert McClure, Bank joined Russell Volckmann and Wendell Fertig - veterans of guerrilla warfare in the Philippines - to play an integral role in the creation of the US Army Special Forces.

Found the details regarding post ww2 history to be particularly interesting. Especially those regarding se. Asia.

I received a free copy of this audiobook at my request and have voluntarily left this review.

Great look at the founding of US Special Forces

Very well written book about the early history of and the founding of US Special Forces.

Short history lesson on what the green berets were before they were established and their role in France in WWII. Great to learn history often overlooked.

A good overview of the origins of special forces

I find military history to be a fascinating subject. And as more and more of ww2 becomes declassified I find many great books being written and read by authors and narrators who find these nuggets of history and share them with us. This one covers one man and his contributions while also providing ancillary information on others that give me
Additional names to keep an eye out for as fascinating people of the same era. I was voluntarily provided this free review copy audiobook by the author, narrator or publisher

**I was given this audio book for free from Audiobook Boom and the author for a honest review.**

Aaron Bank was an OSS Jedburgh in World War II and the subject of William Donovon's quote, &quot;Tell Bank to get Hitler.&quot; He'd later become the inaugural commander of the 10th Special Forces Group, earning the moniker Father of the Green Berets. The development and use of unconventional warfare in WWII created a desire to develop permanent units for future wars.

I love history but normally something so detailed about war is not my cup of tea. At first I thought this was going to be more of a biography about Aaron Bank but in reality he is only present for about half the book. When listening to this audio book I thought there was to much detail to the &quot;forward&quot;, almost giving a complete summary of the book without you having listened to it. Having listened to such an introduction, I felt that the rest of the story dragged on a bit more about the events in World War II and not what Bank encountered. Having such an introduction focusing heavily on Bank I just seemed to expect more of him through the book.

However, once the book actually started, I did find I enjoyed learning about a different side of World War II that isn't really focused on in history books or movies. Dean Wagner gave a very clear and smooth narration throughout the book, very easy of the ears. He reminded me of a comfortable history teacher that brings you into the story instead of putting you to sleep. Being such a short audio book also lends to a comfortable understanding of facts and makes a heavy and troubled time in our worlds history easier to find enjoyable to learn about. There were so many troubled things that happened in WWII but this telling really does make you understand the time frame and compassion that humanity could muster against all odds.

If you really enjoy learning more about the history and different aspects of the war that isn't widely shown, then Aaron Bank and the Early Days of US Army Special Forces should be added to your must reads list.

Where does Aaron Bank and the Early Days of US Army Special Forces rank among all the audiobooks you’ve listened to so far?

The history about how special forces was developed.

What does Dean Wagner bring to the story that you wouldn’t experience if you just read the book?

A nice steady delivery that helped bring the story to life.

“I was provided this free review copy audiobook by the author or narrator." This review is for the audio copy of Aaron Bank and the Early Days of US Army Special Forces by Darren Sapp and narrated by Dean Wagner.
This book was an interesting history lesson. I didn’t know any of the background about how Special Forces came to be and this book explained it in a way that was easy to listen to and very informative.
This is the second book by Darren Sapp that I have listened to and was quite satisfied with it. I recommend this author and this narrator.

A short and consice look into Special Forces

Although the title may lead one to expect this to be a biography of Aaron Bank, the book is properly listed under the genre of history. Darren Sapp has put out a well researched work that sheds a tremendous amount of insight as to how a current day 'special forces' have come to be, and he does this in a brief 2.5 hour listen.

Non-conventional warfare has been around throughout all of history as men have always sought to devise new and effective means by which to defeat their enemies. However, this book focuses primarily on how the special forces developed during WWII and shortly there after. Sapp brings up the challenges these types of warfare (e.g. guerilla, non-conventional, psychological, special, etc.) faced. Some of these challenges included resistance from traditional military types who viewed special forces as having a lack of discipline and leadership; to the point of questioning their capabilities and effectiveness. Others were the result of having to train and entrust indigenous fighters in order to infiltrate varying cultures, as well as the length of time invested into each mission in order to be effective. The irony in these is that, looking back, we have come to realize just how dedicated these men are, the amount of leadership they exude, and the overall success rate our Special Forces have demonstrated.

Although I had a decent grasp on the history behind the special forces, this work brought it to an entirely different level. For example, the author tells of the personal meetings between Bank and Ho Chi Minh as WWII was coming to an end and how the Japanese surrender would impact Indochina. Had Bank been listen to at the time, perhaps 58,000 American lives could have been spared if we had not abandoned Vietnam to the communists as Ho Chi Minh was not a communist at the time. The added insight, through the details such as this, found only through in-depth research, made the listen well worth the time.

Needless to say, the value and importance of our Special Forces in today's world are a result of many years of service and dedication of men such as Aaron Bank, Robert McClure, and numerous other proponents. This work (which Sapp refers to as a 'thesis') speaks directly to those years of dedication and I would highly recommend this book to anyone with even a passing interest in the subject. In addition, the narration by Dean Wagner makes for a steady,smooth, and easy listen. Well done all around!

Finally, I was given this free review copy audiobook at my request and have voluntarily left this review and I hope it proves helpful to those considering purchasing this book.

A look behind the scenes

This book was given to me for free at my request and I provided this voluntary review.
This book was an interesting listen. In a world were we hear about military special forces all the time, I kind of took it for granted that they always existed. By giving some insight into a person who actually pushed to get these services instituted, I was reminded of just how young our country still is. A fun and interesting listen. I wish it were longer.