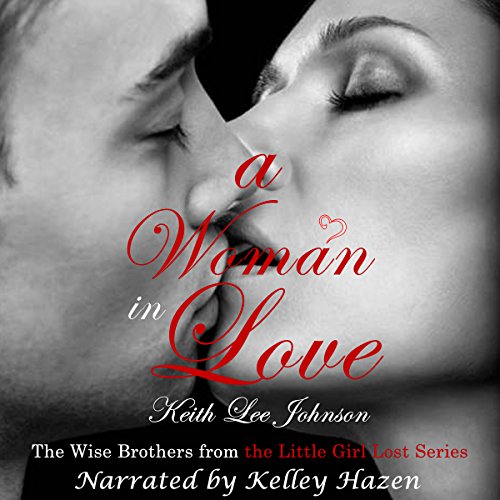 A Woman in Love

This is the novel that gave birth to Johnnie Wise of the Little Girl Lost Series. While the novel is about her nephews, William, Sterling, and Jericho, Johnnie does make a number of memorable appearances.

William, a widower of five years, finds himself falling for a very persistent coworker by name of Terry Moretti, who will not take no for an answer. When he finally says yes, will the challenge of seducing him wean?

Sterling, an attorney who fancies himself a lady's man and lives way above his means, is fired from a prestigious firm and the bills are piling up when a rich woman offers to fulfil all his dreams if he'll do her a favor that awakens his dormant conscience.

Jericho, a Berkeley drop out turned Vietnam War hero is being blackmailed by a rogue CIA officer who had gotten him involved in black ops during the war, wants a favor that could put him behind bars for the rest of his life.

In the meantime, their mother, who claims God reveals the secrets of her sons' lives, will not have a moment's peace until her boys marry and produce legitimate grandchildren.

What listeners say about A Woman in Love

Not what I was expecting!

I found this book to be thought provoking in regards to different view points regarding racism and prejudices. The book is a standalone listen that has many characters. I thought the narrator did a fantastic performance with so many distinguishable voices for the various characters and was consistent throughout the entire book that one could hear who was speaking. She gave so many emotions and the right tension to the situations.
My review is not a synopsis of the book, but my opinion of it. The story has many unexpected twists and unique characters. The story was well written and the narrator was perfect, but the length (19+ hours) was too long to listen to at once and absorb everything. I had requested a review copy audiobook and have voluntarily written this review. I would listen to more by both author and narrator, but would prefer they be shorter in length.

A Woman In Love

A Woman in Love: The Wise Brothers from the Little Girl Lost Series
: Keith Lee Johnson

I have not read any of the Little Girl Lost Series. I approached this as a stand alone book. The three Wise brothers all have their positive attributes as well as negative ones. The plot takes the listener on a journey to explore racism from different points of view. If the listener does not take time to think about what they have heard then they listened to a hot romance.


The narration was well done. The characters were well portrayed. Kelley Hazen gave each character their own unique personality. Great job!!!

you get a lot more than you expect

I expected a basic romance. There is so much more here. Political intrigue. Action scenarios. And then yes, romance, but an intelligent, intriguing, plot - difficulties with family acceptance, difficulties at work, difficulties with the world - will the relationship withstand the pressure? This book is funny. The characters are very likeable, very human. You want them to win, to make it through. And the author makes you think. This book is very funny. And the music references take you back - great music, really sets the tone, time, and place. The end is unexpected - a big surprise. I loved this book.

I liked this book. I like these men. They are funny. They speak their minds. They are not always right, but they try hard. This book has everything. Political intrigue, martial arts, tough beautiful women, great love story. Funny funny character interactions. It is especially spot on with what is going on in our country right now - the fact that race is becoming a topic we are talking about. I loved the film and music references - so my style! The Godfather and Bruce Lee and R&amp;B! Great book. I could see it as a movie or TV series.

Great book. These characters are so fleshed out, you know exactly who they are. The world they live in is fascinating and fun to imagine. The story covers years of life and experience for the brothers and the people in their lives. Hilarious interactions, outrageous events, unthinkable drama, stunning tragedy. You meet their whole family and feel like you know them. This is easily a stand alone title - you do not need to know the series. If you enjoy being thoroughly engrossed in the world, life and times of a book this is a good one for you. The end is something. I must admit by the time I got to it I didn't realize how completely invested I had become in these people. This is a smart book, it makes you think about what you believe.

I am a HUGE fan of the Johnnie Wise series, but this continuation disappointed me. Keith L. Johnson should’ve started another series for this storyline.