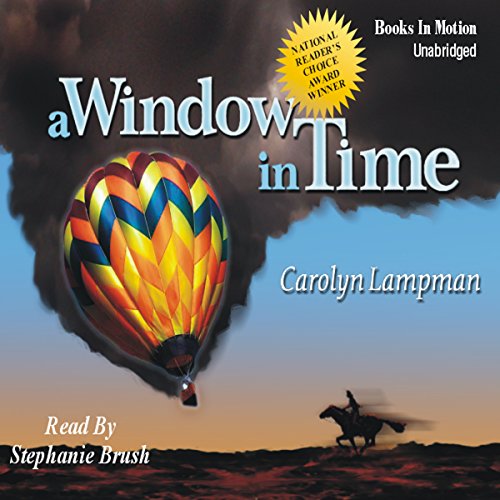 A Window in Time

A Window in Time

One beautiful, breezy day, Brianna Daniel's hot air balloon joyride turns into "gone with the wind", as she is somehow blown back to the year 1860. Bumping along the road to the Split Rock pony express station as a mail-order bride to Lucas Daniels, Brianna realizes that she has exchanged lives with her great-grandmother, Anna.

The thoroughly modern Brianna is hardly the docile bride that Lucas, her groom-to-be, had in mind. In fact, they dislike each other instantly. But beneath that fiery conflict sizzles something even more intense and impossible to ignore. As this century meets the last, two unlikely lovers unite in a flame of desire that will endure through the ages.

Well it's always nice to be rewarded when you take a chance on a new book. I could hardly stop listening. You fall in love with the characters, specially the ones in 1860's, it's very funny to listen as the slang and independence of a 2004 woman confronts the 1860's Wild West pony express men..I do find the 2004 Tom and Ana history boring compared to Lucas and Briana in 1860's, lucky enough this last takes up most the book. The Narrator does and wonderful job with just the right voices for the characters, specially for Briana and Lucas, it's a pleasure to listen to their constant teasing and quarreling. Try it I think you will enjoy it. I surely did!!

This was a really refreshing time travel book with a good plot and good ending. The history was accurate and became real to me since I had visited that same area in Wyoming. I felt like I knew the characters and wanted to hear more about their adjustments to a new time period when the book ended. Worth reading.

i read this book (in actual book) about 6 years ago. I lost the book shortly after, but kept on wanting to read it again. I am glad audible had it. I like to read a lot, but I LOVE listening as well. This book has time travel, romance, mystery, adventure, and fun all rolled in one book. I recommend it to all who wants a really good fictional book to listen to.

I really enjoyed the book. This is a time travel story without a lot of explanation about the actual process of time travel. I loved reading about the Pony Express and life in the times before the civil war. The twist at the end was fun and unexpected. I recommend it!

This was a really entertaining listen, I had a grin on my face the whole time. It started off cheesey and the whole great granddaughter plot didn't sound like it would be a very hot romance- but it did not disappoint.

I really enjoyed this book! It is funny, witty and very romantic. I got really caught up in the story and had a hard time putting my iPod aside.