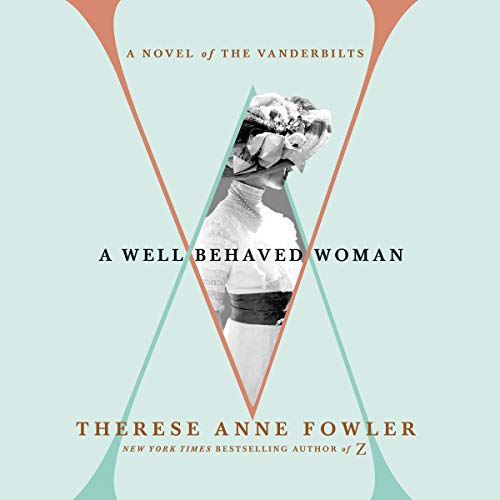 By: Therese Anne Fowler
Narrated by: Barrie Kreinik
Try for £0.00

"More than a rewriting of history, this is history reimagined from a fresh angle, delivered here with energy, sensitivity, and flair." (AudioFile Magazine)

This program includes a bonus interview with the author.

A Well-Behaved Woman is the riveting audiobook about iron-willed Alva Vanderbilt and her illustrious family as they rule Gilded Age New York, from the New York Times best-selling author of Z: A Novel of Zelda Fitzgerald.

Alva Smith, her Southern family destitute after the Civil War, married into one of America’s great Gilded Age dynasties: the newly wealthy but socially shunned Vanderbilts. Ignored by New York’s old-money circles and determined to win respect, she designed and built nine mansions, hosted grand balls, and arranged for her daughter to marry a duke. But Alva also defied convention for women of her time, asserting power within her marriage and becoming a leader in the women's suffrage movement.

In A Well-Behaved Woman, Therese Anne Fowler paints a glittering world of enormous wealth contrasted against desperate poverty, of social ambition and social scorn, of friendship and betrayal, and an unforgettable story of a remarkable woman. Meet Alva Smith Vanderbilt Belmont, living proof that history is made by those who know the rules - and how to break them.

Praise for A Well-Behaved Woman:

"A Well-Behaved Woman is an extraordinary portrait of a strong, fascinating woman who rose above societal convention and even her own expectations to become so much more than anyone might have predicted.” (Christina Baker Kline, New York Times best-selling author of A Piece of the World and Orphan Train)

“Oh how I loved every instant I spent in the world Fowler has recreated here. The story of Alva Vanderbilt is elegantly and emphatically told. Prepare to be enthralled!” (Elin Hilderbrand, New York Times best-selling author of The Perfect Couple)

What listeners say about A Well-Behaved Woman

A most unpleasant woman

Alva Smith manages to marry a Vanderbilt! After 20 years of having fun, improving the Vanderbilt situation in society and behaving "like a plank" when in bed with her husband, she discovers he has been finding his pleasures elsewhere (can't blame him!), is outraged and gets a divorce.She then forces her daughter into marriage to a duke.... That part of the story is quite interesting - clothes, houses, jewels, etc.
Unfortunately we now veer into saccharine romance with another millionaire; bossy-boots Alva proves to have a soft centre and we are treated to some geriatric sex scenes.
She then becomes involved in feminist activism - which is when I gave up the book - assuming it was just another vanity project on her part.
Narrator was excellent.

An Illuminating Light on a Greatly Maligned Woman

I thoroughly enjoyed “A Well Behaved Woman”. I was pretty familiar with Alva Vanderbilt, mostly with the stories surrounding her supposed forcing of her daughter Consuelo into marriage with the Duke of Marlborough. But this novel revealed Alva’s background which clearly influenced many of her decisions. She was a fascinating woman — as an architectural historian, I enjoyed learning more about her collaborations with Richard Morris Hunt, who is one of my favorite architects. Her contributions to the Suffrage Movement were also very important. Like many women in the Victorian period, she had to sacrifice her personal feelings and beliefs in order to survive. I’m glad that she eventually found some happiness even if it was relatively short lived. If you love reading novels about real life historical personages, you will want to pick up this book.

I fell in love with Fowler’s novel Z. I understood her desire to show it wasn’t merely Zelda’s doing that F. Scott Fitzgerald died too soon and broke. However, in this novel, Fowler resorts to complete fantasy in her attempt to humanize Alva Vanderbilt, down to demonizing W.K. And the family, to flagrant untruths regarding Alva-a truly disgusting human in her own right. The book IS enjoyable and should be listened/read as fiction. The performance by the talented Kreinik is marvelous-her command of French alone is noteworthy-and the story is fun. But don’t make the mistake of thinking the story is in any way similar to the real Alva Vanderbilt. This Vanderbilt “suffragette” forced her daughter to marry an English title by imprisoning and isolating her own daughter. Keep this in mind as you read this fictional fantasy. Hopefully, Fowler’s next book will be as balanced as Z and she won’t go searching for humanity in those that never had it. Sometimes, Ms. Fowler, a woman is demonized by history appropriately and with good reason.

Didn’t enjoy this story. It’s a complete saga but there’s nothing to it. Quite boring. It tells the story of Alva’s life, rags to riches and how she embraces the riches while still questioning what true love is and how to find it. Didn’t enjoy. Couldn’t wait to get to the end. Just went on and on.

I thought this was going to be a biography...It wasn't, it was someone who was writing a very odd, imagined interpretation of a famous Vanderbilt's life. . A HIGHLY fictionalized intrepretation of Alva, her inner feelings and her significant others...right down to her subject's sex scenes and dialogue as the author imagined it, Gratuitously adding Alva's thoughts while losing her virginity and Alva's thoughts about her tingly private parts and affair.....really? So stupid.

What a Super Fantastic and Timely Book

The author is so very talented. The characters were so richly captured. An important book regarding the gilded ages and scarily timely for where we find ourselves now. Authentic well researched. The Authors notes and interview at the end are insightful and profound.
Beautifully narrated. My number ONE book so far this year.

Loved the story. Very intriguing, at times sad, victorious and full of sexual tension with rare passion that is palpable.

Descriptive without being boring, great story about a great lady. The feminist lean is not my thing, but its subtle enough to ignore. Good book. recommend.

a well written book and the performance was on point. loved the story; great characters and interesting historically.

Really enjoyed this story, and the narration was perfect. I really took me to the period. Highly recommend.

a story that stays with you.

You get pulled into their lives in the first chapter and it doesn't let you go until the end.