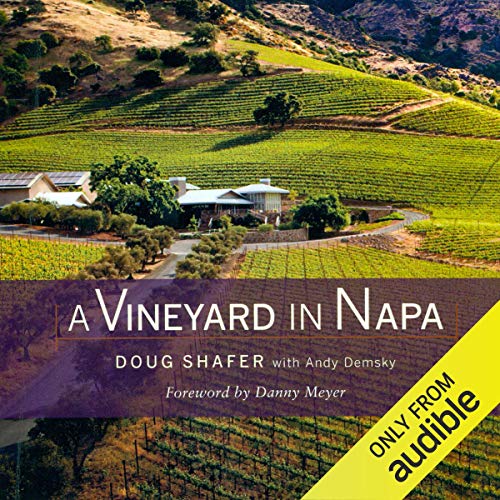 A Vineyard in Napa

By: Doug/Andy Shafer/Demsky,Andy Demsky
Narrated by: Kevin Young
Try for £0.00

At the age of 47, when he was a successful publishing executive and living with his wife and four children in an affluent Chicago suburb, John Shafer made the surprise announcement that he had purchased a vineyard in the Napa Valley. In 1973, he moved his family to California and, with no knowledge of winemaking, began the journey that would lead him, 30 years later, to own and operate what distinguished wine critic Robert M. Parker, Jr. called "one of the world’s greatest wineries". This book, narrated by Shafer’s son Doug, is a personal account of how his father turned his midlife dream into a remarkable success story.

Set against the backdrop of Napa Valley’s transformation from a rural backwater in the 1970s through its emergence today as one of the top wine regions in the world, the book begins with the winery’s shaky start and takes the reader through the father and son’s ongoing battles against killer bugs, cellar disasters, local politics, changing consumer tastes, and the volatility of nature itself. Doug Shafer tells the story of his own education, as well as Shafer Vineyards’ innovative efforts to be environmentally sustainable, its role in spearheading the designation of a Stags Leap American Viticultural Area, and how the wine industry has changed in the contemporary era of custom-crushing and hobbyist winery investors.

What listeners say about A Vineyard in Napa

More than just a book on The Napa Valley.

I am now on my third listening of this Audio book.

As with my title, this is more than a story about the Napa Valley. This is the story of how one man changed his and his families lives forever.
Beautifully narrated, at first I thought it was Doug Shafer narrating himself.
This is a story of how Shafer Vineyards started but more than that, it is a story of how the Napa Valley operated and the people of the different appellations were involved in its struggles and glories in the early 1970’s.
I have purchased a hardback copy of this book to add to my collection.

This is a wonderful listen.

One of the better historical perspectives

I liked this book, starting this on heels of 'Gallo be thy name,' and having listened to most of the other audiobooks on CA wine currently available (Gallo, Mondavi, Kendall Jackson, etc). It seemed authentic and unpretentious and lent interesting historical perspective on both the region as it emerged into a winemaking powerhouse, the personalities, the changing styles relative to an increasingly sophisticated US consumer. Plus, the book delves into many of the issues related to making quality wine, how they made mistakes yet learned from them as they moved forward. It's definitely not a barn burner book or a cliffhanger listen, but it was definitely worthwhile.

Well worth the read.

This has been a very insightful look into the Schaefer family business and some history of Napa Valley.

As a sommelier, I have had the pleasure of meeting Doug Shafer and selling his wines for over 25 years. This book is well written and tells the adventure and story of an iconic Napa Valley winery.

Great story of one family's growth with California's Wine culture

This is a really interesting story of a family growing along with California through the 70s to today. It's written for both wine nerds and casual drinkers alike. Only a few chapters get rather detailed on California's AVA history but the rest is simple enough for all to understand and enjoy.

Great insight on the history of Napa Valley from an iconic winery. Thoroughly enjoyed listening to this.

Any wine lover will enjoy this "coming of age" story about The Shafer Vineyards in Napa Valley. I regularly listen to (and enjoy) Doug Shafer's podcast so I was particularly interested to learn about the early days of the Vineyard, and all that transpired to create the success that they now enjoy. Being familiar with Doug's actual voice made the narrators voice a little less believable and harder to follow at first, but I got used to it as I became engaged in the story. All told, this is a very enjoyable audiobook.