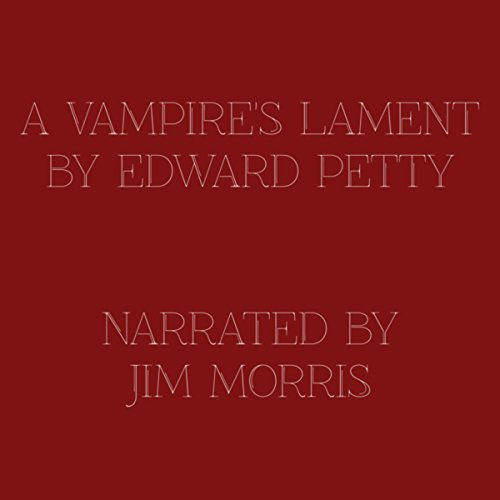 A Vampire's Lament that's sure to haunt you!

Extended "look inside" sample below.

This poem, although it was written by gay author Edward Petty almost 12 years ago, still captures Halloween's chilling and scary feel, and depicts how some spirits can remain restless.

A Vampire's Lament speaks about how monotonous and mundane it can be trying to sustain a sense of life, even in an not-so-dead state.

Bloodletting for food and survival are two horrors that can eventually wear on even a vampire.

What listeners say about A Vampire's Lament

I enjoyed the reading of this poem and have listened to it a few times to gain different perspectives each time.

A very short vampire's lament. The narrator did a great job with this audiobook.

This is a quick listen and great for this time of year. It is an intriguing poem. I am not always a fan of the pattern of rhyme.

I really enjoyed the delivery of the narrator Jim Morris. His tone and pace kept it from sounding too sing-songy. I would be interested in hear more of his work! Great energy.

This was a very short (2 min long) poem about a vampire's well you guessed it, (his lament). The poem was very well written and the narration was on par. It had added sound effects with gave it more immersion. would be great addition to a vampire novel or even a movie.

Would you listen to A Vampire's Lament again? Why?

Yes I have listened to it twice and will again. It's fantastic. I really enjoy the bells and tones with it as well. I love the poem.

What other book might you compare A Vampire's Lament to and why?

I don't know if this question applies.

Which character – as performed by Jim Morris – was your favorite?

Yes, I want to hear more. I like the darkness of the vampire.

Jim Morris' voice is perfect. I hope to hear more from this vein of creativity from Edward and Jim. I received this audiobook foc in exchange for an unbiased review.

Would you listen to A Vampire's Lament again? Why?

Yes, I feel it would make a great Halloween Poem.

Make the most of your precious time. This tell us how precious life is & how we should savor it.

I liked the added music & sound effects! The audio breathes life into this poem (as with all audiobooks). The narrator has a perfect voice for this poem. I can see it being used on Halloween for parties and trick or treat-rs via speaker as families walk up to a house. I can also see this poem (in audio version) being used in school when poetry is the subject. Well done Edward Petty (author) and Jim Morris (narrator).