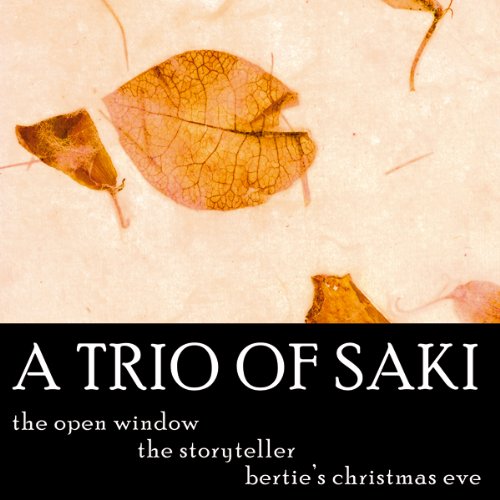 A Trio of Saki

Saki was the pen name of Hector Hugh Munro (December 18, 1870 - November 13, 1916), a British writer, whose witty and sometimes macabre stories satirized Edwardian society and culture. He is considered a master of the short story and is often compared to O. Henry and Dorothy Parker. His tales feature delicately drawn characters and finely judged narratives.

This audiobook collects three of his finest short stories:

"The Open Window" - A man with the unlikely name of Framton Nuttel comes to a country village for some peace and rest. He calls upon a lady his sister used to know; for a few minutes he is left alone with her niece, who has quite an active imagination. She tells Framton a story about the tragedy of the lady's husband and two younger brothers, who had gone hunting one day three years earlier and never returned. The bodies were never found, and because of this, the window from which they left is always kept open.

"The Storyteller" - Here is a cynical antidote to crude didacticism. An aunt is travelling by train with three of her nieces and nephews; a bachelor is sitting opposite. The aunt starts telling a story, but is unable to satisfy the curiosity of the children. The bachelor intervenes and tells a different kind of story, which feeds their curiosity and imagination.

"Bertie's Christmas Eve" - A Russian peasant tale reveals that the cows may speak at midnight on Christmas Eve. This gives Bertie the perfect excuse to exact a revenge on his meddling and tiresome extended family.

What listeners say about A Trio of Saki

If you know Saki's writing then you don't need me to recommend him. If you don't know him, he's PG Wodehouse's evil and perhaps even more brilliant twin. The narration was terrible, sorry, completely wrong for this author's stories.