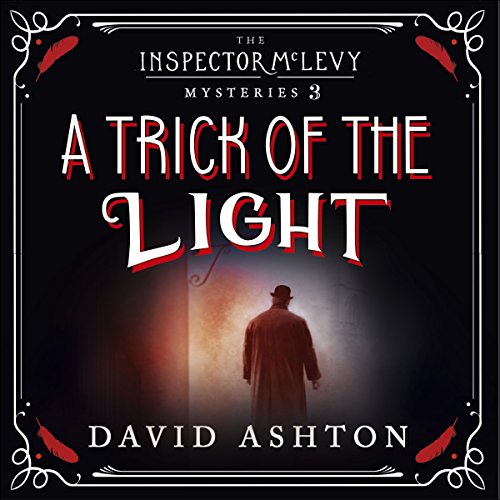 A Trick of the Light

London had Sherlock Holmes. The dark alleys of Edinburgh had Inspector McLevy.

Known as the father of forensics and a likely influence on Sir Arthur Conan Doyle, real-life police inspector James McLevy is here reinvented by David Ashton in a thrilling mystery - the third in a series - set in dark, violent Victorian Edinburgh.

Halloween 1881, Edinburgh, and the dead are restless. In respectable Edinburgh society, beautiful young American spiritualist Sophia Adler is causing a furor with her dramatic séances. But the ghosts of the past seem hell-bent on retribution.

Inspector James McLevy finds his investigations distracted by more earthly concerns when Muriel Grierson, an outwardly genteel widow, is robbed at home. Her knight in shining armour - one Arthur Conan Doyle, recently graduated from medical school - is keen to learn from such a master of detection as the renowned inspector, but McLevy is less sure that he requires a new acolyte.

A vicious murder occurs with evidence of supernatural strength and violence. Treachery revenged from a battle long ago. All roads lead to Sophia Adler, and the inspector becomes involved with one of the most dangerous women he has ever encountered.

What listeners say about A Trick of the Light

Have become a huge fan of stories and narrator!

Would you listen to A Trick of the Light again? Why?

Yes in fact I already have. It is rich in detail and characters as well as the central storyline

Have you listened to any of David Ashton’s other performances? How does this one compare?

Yes - I appear ot be one of the few people that love him narrating McLevy - I admit I hated it when I tried to listen tothe first book and even (shamed to say) returned it. But I gave him another go and am now hooked. I think he IS the character of McLevy

I lenjoy the interaction between McLevy and Mulholland and also the Inspector.

Unlike a couple of the other books the violence was not quite so detailed in this.

Kept going off at tangents. Weak story with lots of unrelated filling He has developed characters well

I'd give this zero if I could

I've listened to the first two books in this series and while I love the characters, Ashton makes the experience a total trial. This instalment seems to be even worse than the first two books and they were bad enough. This time the plot is not carrying me through.
Because I do like the premise of the book I'm going to return this and give the BBC radio versions a try.
Take the hint David and let someone else have a go - you might get more sales that way.

I'm a great fan of McLevy dramatisations ... downloaded this last night in anticipation of hours of wonderful listening experience ahead of me...now I can't work out whether it is simply the dull, flat, narration which found me being dragged down with it ... or the story-line, which I must admit I didn't engage with ... probably because of the dreary narration. I wonder if I can get a refund?

couldn't cope with the narration

CAUTION: As of October 20th, Audible still had not repaired the file they've posted for this book. The available version ends at Chapter 35, while the book goes on another eight chapters. (We will know when the file is fixed by checking out its timing: the truncated version runs for 12 hours and 34 minutes. The full version will probably run to 13 hours and something.)

ABOUT THE PERFORMANCE: As interesting and engaging are the plots and the characters in the McLevy series, David Ashton's narration will be the sticking point for listeners. Simply put, Ashton violates every rule that voice actors and radio talent are taught (I used to produce for public radio): Ashton "kisses" the microphone so there's a lot of mouth and breath noise; he sometimes reads at painfully slow pace - in part because he often indulges in what I call a "purple delivery." By this I mean his cadences become over-the-top (hammy and melodramatic), or under-the-bottom (he speaks so low and slow that many of his words become swallowed inside his guttural Scottish accent.) In short, this incredibly mannered performance ranges from the broadly exaggerated to the muddy and indecipherable. Listening to Ashton can be an extremely frustrating experience and will no doubt put off a lot of people

HOWEVER ... I must add that the very weirdness of Ashton's delivery stirred my curiosity and now that I've gotten used to it, I find it mesmerizing, moody, and entertaining. (His Scottish accent helps make the performance work: I doubt he could read like this with a normal British accent.) BUT I couldn't really listen to the performance until I sped up the audio playback by 15% (that is, what used to last 100 seconds now lasts 85 seconds.) At this speed, no part of Ashton's delivery sounds rushed (as it can at 20%). And so long as you have software that counteracts the "Donald-Duck" effect of sped-up tape, the pitch of Ashton's voice remains the same. All that changes is the duration of his interminable...dramatic...pauses and the length of those lingering caresses Ashton can give to his words. After applying this audio tweak, I've come to appreciate Ashton's eccentric performance and the way it evokes the quirky characters and the shadowy, fog-laden atmosphere of late 19th century Edinburgh.

The story is very good but narratator is terrible. Won't download the other two books. I have two more hours to suffer through but will finish it to see how it ends.

What was one of the most memorable moments of A Trick of the Light?

Not a good moment when I realized I would have to spend 12 hours listening to Ashton's overblown oration.

Yes. This is a perfect example of the mistake of allowing an author to read his own works. A reviewer of the first Inspector McLeavy mystery had the same complaints.

Yes, as long as Ashton didn't narrat it. It's a good story.