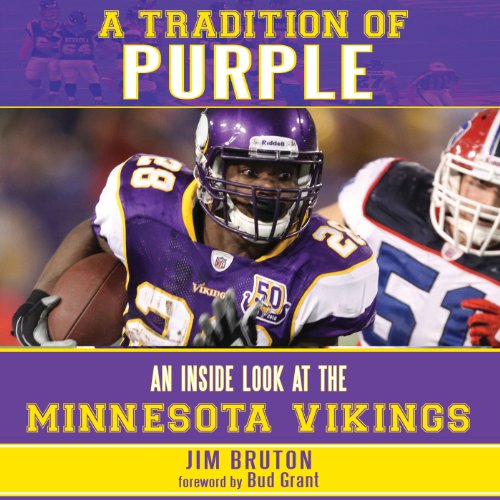 A Tradition of Purple

Onetime Minnesota Vikings player-turned-author Jim Bruton explores the meaning of fandom in A Tradition of Purple: An Inside Look at the Minnesota Vikings. Bruton's years of passion for Minnesota's team comes to life in a lively performance from voice actor Mark Delgado. Covering the history of the team from their creation in 1960 through 2010, Bruton's audiobook touches on the lives of everyone from Adrian Peterson and Norm Van Brocklin to behind-the-scenes allies who helped make the Purple a force to be reckoned with. Inspirational and touching, A Tradition of Purple is a must-listen for anybody fiercely loyal to the Vikes.

A celebration of Minnesota Vikings football, Minnesota's most beloved sports franchise - newly updated through the 2010 season!

In this heartwarming and inspirational book, Jim Bruton takes a look beyond the game and examines what the Minnesota Vikings have meant to fans and communities across the country. Covering the Vikings from every angle, A Tradition of Purple is an up-close look at the players, coaches, charities, Hall of Famers, and people behind the scenes who have come to define what it means to be Purple over the last 50 years. Listeners will get an inside look at such famous Vikings as Norm Van Brocklin, Bud Grant, Fran Tarkenton, Carl Eller, Alan Page, Jim Marshall, Chris Doleman, Adrian Peterson, and more. This is not a book only about football, this is also a book about life, community, and the team that inspires a legacy.

What listeners say about A Tradition of Purple