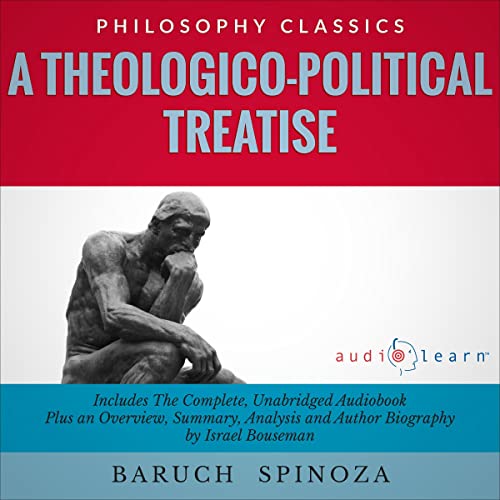 By: Baruch Spinoza,Israel Bouseman
Narrated by: Terry Rose
Try for £0.00

The Theologico-Political Treatise, written by the Dutch philosopher Baruch Spinoza, was one of the most controversial texts in the early modern period.

In it, Spinoza attempts to reconcile reason and religion, showing that they were compatible with one another, equally necessary, and supportive of one another, should the scripture be interpreted correctly. This work was a defense of reason as a higher faculty and as a necessity in the life of the conscious human being. To believe that reason is inferior to scriptural interpretation, he asserted, results in superstition and in a division between practical life and professed religious tendencies. Spinoza uses scriptural references to argue the need for an alternative interpretation that avoids superstition and cultural stagnation, while offering a mode of life which can be practically applied to address daily concerns.

The AudioLearn version of the Theologico-Political Treatise is prefaced by a summary which briefly explores the work, offering the main thrust of each chapter in simple and accessible terms. Also included in the summary are a biography of the author and the background of the work itself. In addition, the summary contains an overview, synopsis, and analysis, as well as an exploration of the historical context, social impact, and criticism evoked by the piece.

This is an ideal text for those interested in history or philosophy and a must-hear for students of theology.

What listeners say about A Theologico-Political Treatise