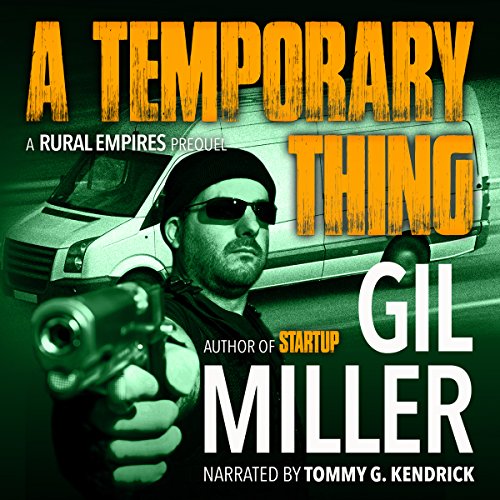 When Lyle Villines learns his daughter has leukemia, he searches for a way to pay the huge medical bills that come with the condition. In desperation, he takes a well-paying under-the-table job driving a delivery van. He doesn't know what the cargo is, but the pay is enough to make him ignore that for the sake of his child.

Lyle questions his decision when he's hijacked on the interstate and left alive only so he can deliver a message to his employer. Turns out the load wasn't exactly legal. Nor was it insured, meaning he will have to pay for the loss by taking on a new job - cooking meth. Not only does it pay better, his boss says, but it keeps him off the road. When Lyle objects, he's given a simple choice. He can either take the opportunity, or his family will suffer. Faced with no other option, the only thing to do is follow orders...and hope he can get out alive.

What listeners say about A Temporary Thing

Lyle is an ordinary man, divorced from Pattie but still in close contact with his children, working as a forklift truck driver, nothing extraordinary. Then he gets a phone call from his ex-wife - his young daughter has leukaemia. When the treatment bills mount into the much-more-than-half-a-million dollars, he's offered a way to make extra money. He's suspicious, uncertain, but "you do what you got to for your kids."

I'm sure every parent can relate to his desperation Lyle felt. I know I do, especially since I've been in his position of having a little girl with childhood cancer and the gruelling regime of chemotherapy and hope. But I was lucky: her treatment bills, enormous though they must have been, were all taken care of by the National Health System. Even so, it left us in debt. How terrible then to not only have to go through the trauma of the illness but also face those ever mounting financial costs and the absolute necessity for extra cash, not just a few pounds but a small fortune.
So Lyle gladly accepts the chance to make extra money and closes his eyes to what is really going on.

Written as an account left by Lyle himself, his story is sensitively and well constructed leading us, with slowly building tensions, through to the possibly unexpected ending. Narrator Tommy G. Hendrick is completely believable as Lyle, his pleasant slow delivery with it's unsophisticated (southern?) accent perfectly mirroring the picture drawn of the man doing what he can and then going beyond that, for love of his child. I soon forgot that this was simply a story and listened as if to a new friend reliving his past. There is action here, but slow moving, mostly. Instead, it is the character of the man and the choices he makes which hold the listener throughout.

This book is an unexpected gem. I was freely gifted, A Temporary Thing, by the rights holder via Audiobook Boom and when I received it had no real idea what to expect. I have now noted both author and narrator as voices to look out for in the future and would very much like to read a sequel to this story, so reluctant am I to say goodbye to Lyle and his family and friends.
Highly recommended.

What did you love best about A Temporary Thing?

The story and cast of characters which made for an enjoyable listen.

What does Tommy G. Kendrick bring to the story that you wouldn’t experience if you just read the book?

I was voluntarily provided a free copy of this book by the author / narrator / publisher and I'm leaving an unbiased review.

From the summary, I figured that there will be some similarities between this book and the Breaking Bad tv show. And there were quite a few such similarities. The author also tried to dance around that same dilemma at places. The original parts of the book manage to stand on their own, despite the similarities at other places. But the problem with this book is - nothing comes as a surprise. You can predict what's going to happen next and that ruins the fun of reading the book.

fwiw, the narrator does a good job.

If you could sum up A Temporary Thing in three words, what would they be?

What was one of the most memorable moments of A Temporary Thing?

When he wants to cook and distribute his own meth was disappointing. Didn't see that coming.

What about Tommy G. Kendrick’s performance did you like?

Great voice and interpretations of characters.

Both the author and narrator were new to me. I enjoyed this book, and thought the narrator fit the main character. Part of this book was very thought provoking in what we do for our children. Cancer is horrible, and extremely draining both financially and emotionally. I thought the ending was very good. My review is not a synopsis of the book, but rather my opinion of it. I was voluntarily provided with this review copy audiobook at no charge by the author, narrator, and or publisher.