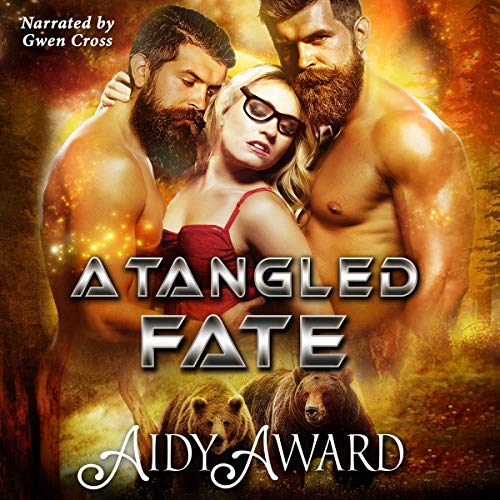 A Tangled Fate: A Bear-Shifter and Curvy Girl Ménage

Save the geek girl. Save the galaxy.

Ash Ayininkalbi has spent her whole life searching for who she is supposed to be. She doesn't know where she came from, why she can use magic, or why these two mega hot alien bear-shifters have suddenly kidnapped her. But, she does know one thing. Science. Her brains have gotten her out of worse situations than being stuck between two...aliens? Bears? Supermodels?

Russ and Dunn Barrett need a weapon to defend thousands of innocent lives from the spectral warriors who have been stealing souls throughout the galaxy. They know exactly how to get one. But, cut off from Star Command, they'll have to kidnap an Earth scientist and coerce her into making it for them.

That task becomes doubly hard when the curvy, lick-worthy scientist turns out to be both a witch with erratic powers and their fated mate.

When the spectral scourge attacks, these twin bear-shifter warriors will have to choose: Save their soul mate, or save the universe.

Get your copy, and continue the saga now!

What listeners say about A Tangled Fate: A Bear-Shifter and Curvy Girl Ménage

This is the first time I have listened to Gwen Cross and to start with I was worried that I wouldn't settle in with her accent. You know what, that soon disappeared and I got completely sucked into the story and forgot about the accent completely. In fact her voice became warm and comforting. I enjoyed the way she told the story, especially the rather juicy bits. Brilliant narrator!

Picking up a book that is a part of a series can be problematic but I didn't feel that at all with this one. The world was really well explained and the idea very novel, I loved the set up with the Star Rangers. The characters are great and brilliantly described and well rounded and ohhhh those bears! I loved listening to how they changed over the book and how their relationships grew. I did, however, spend quite a while shouting 'Nooooooooo' in my head at one part of the story....listen to it and you'll find out what I mean! I am looking forward to delving into this world again with the next book.

Aidy sure knows how to write a funny curvy girl book. I love the humour and the wit. Great storyline with lots of action and characters you will love. Gwen has such a lovely tone to her voice that I would be happy listening to for days on end.

I loved Aidy Award's writing! I love the sassy heroine and the twin alpha men. This world that the author is building in this quite unique for shifters, especially twin bear shifters! The author was able to give us a captivating fast paced story with some very steamy scenes and great characters. Ash is smart and funny (dare I say even a little geeky), but relatable and just an awesome strong female. The story line, with these characters, is fascinating and well written.

I don't believe I've heard this narrator before but I think she was a perfect fit for Ash and really brought out her nature. Her performance was fabulous and made this shifter story even more awesome.

This is a perfect addition to this series. This book can be read as a stand-alone, but I feel you should still read the first one as well because it is just as good. The pain and confusion that the twins go through is difficult to hear at times, but their mate is stronger than they think. This is the perfect relationship with these characters and couldn’t have imagined a more perfect fitting.
Narration on this book was just as good as the first. Gwen adds the perfect southern charm to her characters.

My Head Is Reeling!

I finished this story yesterday and my mind is still trying to process everything! Ash doesn't people well, which is why she prefers science to people: People lie, numbers don't. This entire time she thought she was working for the good guys, but just imagine finding out, not only do you work for the bad guys... you have two mates... and they're right in front of you... in a rescue mission! Twin brothers, Russ and Dunn, have always grown up thinking they weren't meant to have a mate because it would kill the mate. Imagine their shock when the person they needed most happens to be the scientist they are rescuing to save to the universe! I thought the first book was great, but this book is fantastic! There was humor (who doesn't love nerd humor?!), romance, betrayal, and discovery. Gwen Cross was amazing as the narrator, bringing each character to life while reminding you of characters from the previous book. This book was absolutely fantastic and I'm glad I got the chance to read it!

I was a fan of this series going in! Book 1 was full of so much humor that I just couldn't help but fall in love. Book 2 continues the saga with a new set of characters. I love this Alien shifter story with its quirky characters and Steamy storyline. After reading it, I don't know if i would suggest reading these as standalones- even though they are on different characters. I think you will LOVE the series but book 1 sets a great base for the series so start there.

This story has a lot of potential. I just feel it was very rushed. There was a story, but it was overshadowed by sex and lust. Not that there's anything wrong with that. I'm sure this book will be perfect for those who enjoy a high heat level. It is a very amazing story and idea though. I will say that. I didn't hate it. I just wish the author would have drawn it out a bit more. The narrator did a fantastic job on this book. I am very impressed. I haven't listened to many books with the narrator, but I wouldn't mind it. I could see her quickly becoming one of my favorite narrators. She is very talented. She can put flair to any story.

Great Second Book in the Series!

This is the second book in the Fated For Curves Series. I love this Series! This is a great Series, fun, and sexy! This second book is my favorite. I liked Ash, a scientist, and her hot alien bear-shifters warriors, Russ and Dunn. They share a strong, and hot chemistry! The storyline is fun, fast-paced, action packed, and steamy! Gwen Cross did a geat job with the narration. Now, I can't wait for the next book in the Series!

Ash is a scientist who believes in facts and numbers. She believed that she has been helping others with her work but when two bear shifters advise that she has been working for those who intend harm her life was turned upside down. Russ and Dunn are bear shifters who have been sent to retrieve Ash to help them in their quest, but they never expected her to be their mate and now they just have to convince her.

This is a unique story line filled with suspense, twists and red hot chemistry. Ash is feisty and independent, and she is drawn to Russ and Dunn for very different reasons, one for his scientific mind and one for his heart and together they are magic.

I thought the narrator did a great job with both the pacing and emotion of this story. 🎧AudiobookObsession.

Another amazing book from Aidy Award. Absolutely love this series! The narrator did a great job bringing the characters to life with perfect voices and pace. I loved the relationship that built with a sassy woman and the very hot alpha MEN. This is a fantastic story with lots of yummy steamy scenes. This is a must read!
#AudiobookObsessionReviewer

I am in complete awe of this book! It deeply touched my heart on so many levels. Just when I think this author has reached her eclipse, I find that she has only peeled back yet another layer of her fantastic creativity. What a magical surprise each time I open the next book of this incredibly brilliant series!

There is no shortage of emotion, complexity and intelligence within these pages. I was kept at the edge of my seat and felt my own heart being shred by the beautiful intensity that washed over me in unending waves. The overall story is so provocative, compelling, and utterly addicting! I seriously can't wait until the next book is out.

The narration was truly impressive and superb! I don't usually like when one narrator reads all of the characters in a story, but this narrator is able to perform each in a wonderfully entertaining way that I find myself falling under her amazing spell. She is absolutely amazing, and I enjoyed every second of this second book in this stunning adventure!

Paranormal ménage with smart girl and lots of laughs

I love Aidy’s sense of humor! This paranormal romance has a smart heroine, beefy alpha shifters, and lots of laughs.

Out of this World

Stars alive - what a fun, sexy read! Out of this world. I loved Ash's banter and science geekiness. She brought such witty humor that I was chuckling aloud! LOVE that! Also, I confess, personally I do not do the whole beardy look but after this book - it's making me re-consider. Great job - hope to get more like this from Aidy Award!

I received a free audio version of this book and I am freely providing this honest review.