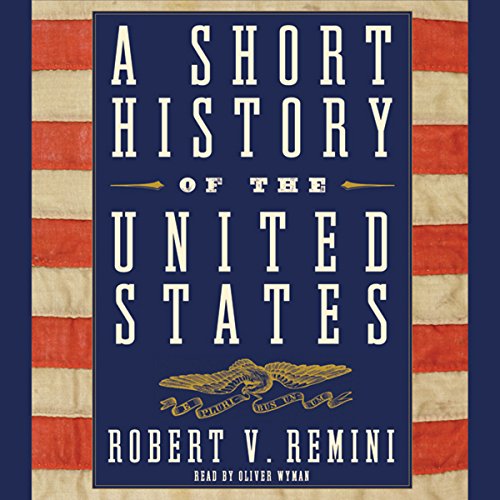 A Short History of the United States

By: Robert V. Remini
Narrated by: Oliver Wyman
Try for £0.00

Offering an abbreviated, accessible, and lively narrative history of the United States, this erudite volume contains the essential facts about the discovery, settlement, growth, and development of the American nation and its institutions. Robert V. Remini explores the arrival and migration of Native Americans; the discovery of the New World by Europeans and the establishment of colonies; the causes of the American Revolution; the founding of a republic under the Constitution; the struggle over slavery, which led to the Civil War; Reconstruction and the rise of big business; the emergence of the United States as a world power; the descent into the Great Depression; the global conflicts of the 20th century; and the outbreak of terrorism here and abroad.

In addition, Remini explains the reasons for the nation's unique and enduring strengths, its artistic and cultural accomplishments, its genius in developing new products to sell to the world, and its abiding commitment to individual freedoms.

What listeners say about A Short History of the United States

I enjoyed listening to this book but it was not particularly satisfying. There are many "gaps" and the title is therefore accurate. I suppose, it is an interesting entry to this fascinating story.

This was an excellent listen. I have an hour long commute, and was actually looking forward to the trip because I had more listening to do. This book started at US Pre-History, but very quickly progressed into the politics of the US, and typically stayed in a "political" theme. Almost every single US presidential administrations were briefly, and some not-so-briefly were visited.

I would recommend this book to someone who appreciates a good nonfiction book, and has a good block of time available.

My one critical point: I wished there were more "sections." The audible player (my Windows Mobile 6.1 device) only showed 7 sections, so if you loose your place, and don't book-mark, you will jump back too far if you go back to the previous section. I wish the Producer created a new section for every chapter.

The audio book was not complete it would skip over paragraphs so i found myself searching for the paragraph they were reading.

I thought that the content of this book was o.k. Maybe a little heavy on the details and dates, but that information might be valuable to other readers. I had to quit listening to this because the narration is irritating. The narration is so rushed that it is difficult to listen to for over 5 minutes.

Robert V. Remini is a very good historian but you can see he’s not really objective. Long as you read the book with that knowledge it contains a lot of good information while omitting any balance of conservative perspective. I am not looking for either a democrat or republican perspective I’m looking for objectivity. That is hard to find. But not a bad history book.

it gives a decent account of basic historical facts up until about 1913 and then turns up the SJW to 11. from 1980 on the book is indistinguishable from DNC talking points.

i have this book and it's missing things

The audiobook doesn't match up with the actual book past the first chapter. Very disappointed.

A politically slanted Short History of the United States

This book started out really great. I felt I was learning and being reminded of some great facts from the past.
Then I got to more recent history that I lived through and found that the content was very slanted.
This causes me to doubt the things that I learned, making it impossible for me to recommend this book to others.
Also, this book ends before the recession of 2007.

Listening I have the feeling I am missing things

The story is read rather enthusiastically which is nice for historical things. However I had the feeling that I am missing part. It seems that it is written from a specific political view point and not an unbiased historical view point. Taking this in consideration it is still an entertaining listen. Can anyone recommend the other viewpoint so I can get the story complete?

A Short History of the US

I enjoyed the earlier years of this history book but found as I got to the years that I'm quite familiar with, this author leans heavily to the Left. He emphasizes the faults of Republicans and diminishes their accomplishments, then dismisses the shortcomings of Democrats while embellishing the dubious accomplishments of Democrats. Example: FDR did not end the Great Depression by nearly spending this country out of existance; WWII and the war economy brought us out of the depression. If Mr. Remini liked FDR,
he'll surely love our newest president, Barak Obama and his spending spree. As someone once said, "When you find yourself in a hole, don't keep digging".